At Byrnes Auditorium at Winthrop University, actress Tallulah Bankhead performed her one of her favorite stage role in the play “Little Foxes.”

Yes, Tallulah Bankhead performed at my alma mater in 1940. 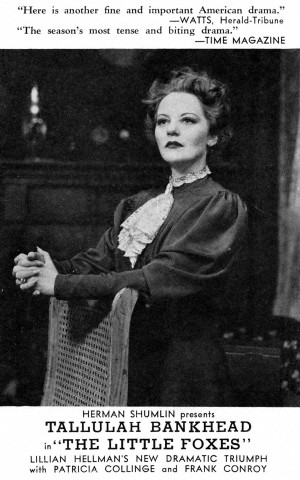 Tallulah Bankhead as Regina Giddens in “The Little Foxes.”

Born in Huntsville, AL, Bankhead’s father was William B. Bankhead-a politician from Alabama and Representative from 1917 to 1940.

But despite her prominent background, Bankhead has been described as flamboyant, wild and dabbled in alcohol and drugs such as cocaine and marijuana.

She left her Southern roots at the age of 15 to travel to New York to become an actress and made her stage debut in 1918. She later was in Hollywood films starting in the 1930s.

After acting in films alongside Gary Cooper, Robert Montgomery and Charles Laughton, Bankhead made her way back to her southern roots.

In 1939, Bankhead originated the stage role of Regina Giddens in the Lillian Hellman play “The Little Foxes.”

Based in the early 20th century in the South, Regina manipulates her daughter and estranged husband to work out a business deal with her unscrupulous cousins.

“All in all, Regina Giddens is the best role I ever had in the theater,” Bankhead wrote in her autobiography, Tallulah: My Autobiography. “So The Little Foxes is the best play I’ve had. Up to this time most of my roles had been on the light and larkish side.”

Later made into a 1941 film starring Bette Davis, “The Little Foxes” ran for 410 performances at the National Theatre on Broadway. 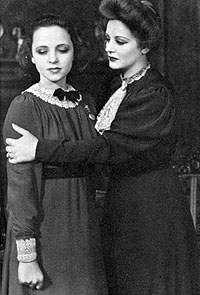 On March 4, 1940, she performed her role of Regina Giddens on the stage of the brand new Byrnes Auditorium of Winthrop College (now Winthrop University) which was an all-girls school until 1975.

“Her seductive southern drawl was an instant hit in South Carolina,” according to the book York and Western York County, SC: The Story of a Southern Eden by J. Edward Lee and Jerry Lee Wes. “After her performance, the audience gave her a standing ovation.”

Bankhead had ties to York County. Her great-great-grandfather George Bankhead moved to lived in Bullock’s Creek, York County South Carolina before moving to Alabama in 1830, according to Lee and Wes’s book.

“As a (local) reporter asked the Hollywood actress about her fast-paced life in California, Bankhead…reminded the journalist, ‘Dahling, I’m from Bullock’s Creek,’” Lee and Wes wrote.

Though Bankhead was not in the film adaptation of the play, her Broadway costars Dan Duryea, Charles Dingle, Carl Benton Reid, and Patricia Collinge starred with Bette Davis.

Knowing that Tallulah Bankhead once walked on a campus where I studied journalism, makes me feel just a little closer to the Golden Era of Hollywood.

2 thoughts on “Classics in the Carolinas: Tallulah goes to college”