Comet Over Hollywood is doing a mini-series of “Classics in the Carolinas.” I’ll be spotlighting classic movie related topics in South Carolina (my home state) and North Carolina (where I currently live and work).

Clemson University has a long history in my family.

But Clemson also has a touch of film history.

In 1973, Clemson, SC and Anderson, SC were the filming locations for the movie “The Midnight Man,” starring and co-directed by actor Burt Lancaster.

In the film, Lancaster plays ex-con Jim Slade who starts working as a night watchman at a local university, Jordan College. The film also stars Cameron Mitchell, Susan Clark and Catharine Bach has a small role.

My mother grew up in Clemson and was a junior at Daniel High School in Clemson during the filming of “The Midnight Man.”

“I remember when the news came out that they were looking at Clemson and a few other places for filming, everyone thought it was very exciting,” said Lisa Pickens, mother of Comet Over Hollywood.

-The campus of Clemson University such as inside Tillman Hall

-Driving down Highway 123 and goes into a bar in Anderson, SC

-Cameron Mitchell exercises in Riggs Field, which was Clemson’s second football field from 1915 to 1941 and now is the university’s soccer stadium

-Lancaster gets off the bus in front of Clemson’s post office which is now Mell Hall, Clemson’s Housing Office.

“A lot of people thought they should use the balcony of our house,” said Barbara Evers, writer and aunt of Comet Over Hollywood. “I don’t remember why. As far as I know, they never considered it.”

Several locals were used in the filming, including classmates of my mother, Lisa Vogel Pickens, and my uncle Henry Vogel.

“Your Mom heard they were holding auditions in the basement of the Post Office (Mell Hall). She got permission, and we went,” Evers said. “We never found the place where auditions were being held. Your Mom was sure excited, though.  She ran down the stairs of the Post Office.”

During the filming of “Midnight Man,” Lancaster was heavily drinking and getting up at 5 a.m. to start filming, according to the Kate Buford book “Burt Lancaster: An American Life.”

“I remember Burt Lancaster stayed in the penthouse of the Clemson House, Clemson’s nicest hotel which now is a dorm for students,” Pickens said. “He complained about the mattress and wanted a king size bed. Friends of my parents, the Whitlocks, let them use their king size mattress. I have no idea why they would do that.”

At the time, the Town of Clemson had approximately 5,500 people living there and the university had 9,700 students, according to the article. 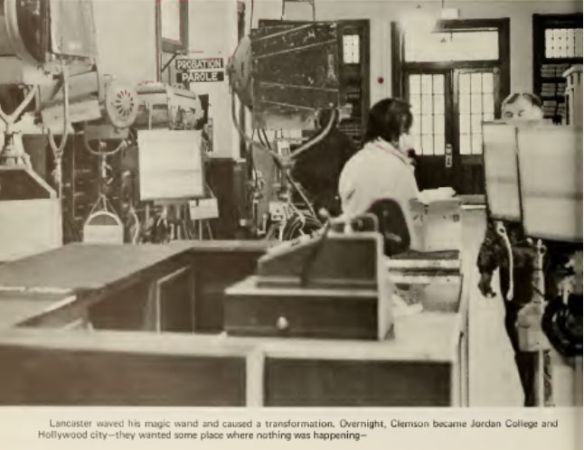 “Boys at the dormitory window applauded at the end of the scene. Lancaster responded with a smile and then pointed out that one of the boys had a woman with him,” said the Herald-Journal article.

Unfortunately, “Midnight Man” didn’t do well. Both Evers and Pickens recall being disappointed that the film received bad reviews.

“You hope it will do well since it was filmed in your hometown, but it didn’t,” Pickens said.

Other movies filmed in the Upstate of South Carolina include the George Clooney comedy “Leatherheads” (2008), filmed in my hometown of Greenville, SC, and “Radio” (2003) filmed in Walterboro, SC.

There was a premiere at the Astro Theater in Clemson on March 14, 1974.

“I thought it would be exciting to go to the premiere but Lancaster didn’t show up, so I didn’t go,” Pickens said. “Even in small Clemson, I never ran across the actors.”

5 thoughts on “Classics in the Carolinas: Burt Lancaster and Clemson University”