This is November’s edition of Comet Over Hollywood’s film references in music videos.

Director/choreographer Busby Berkeley was known for his elaborate nature and kaleidoscope-like musical numbers.

His work has been mimicked in movies such as “The Great Muppet Caper” to music videos such the the 1995 Red Hot Chili Peppers song “Aeroplane.” 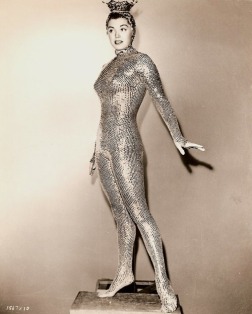 Berkeley directed swimming star Esther Williams in two films, “Take Me Out to the Ball Game” (1949) and the biographical film on Annette Kellerman, “Million Dollar Mermaid ” (1952.)

When Williams dove into the water, the crown hit the water, she broke three vertebrae and was in a full body cast for six months, she wrote.

Also, in the Red Hot Chilli Peppers video, girls swing on trapezes- like in “Easy to Love” (1953) or “Million Dollar Mermaid” (1952). At another part in the video girls dive sideways into the pool, reminiscent of a scene from “Bathing Beauty” (1944).

Another example of a Busby Berkeley kaleidoscope-like shot can be scene at 2:51, which is similar to scene from “42nd Street” (1933).

Thank you our friends over at Hollywood Revue for telling us the references in this video a few months ago!