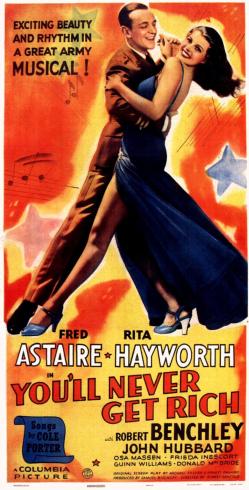 Plot:
Broadway choreographer Robert Curtis (Fred Astaire) gets mixed up in the philandering of producer Martin Cortland (Benchley). Cortland buys a bracelet for a pretty chorus girl Shelia Winthrop (Hayworth) but Cortland’s wife (Frieda Inescourt) find the bracelet after Shelia refuses it. Robert gets mixed up in Courtland’s explanations to his wife, and is able to escape the confusion when he is drafted into the Army.

Trivia:
-Rita Hayworth’s first starring role in a large budget film for Columbia Pictures. It was successful at the box office and turned Hayworth into a star.
-During the filming of this movie, the famous LIFE photo of Rita Hayworth in a negligee on a bed was published, making her even more famous along with this movie.
-Nominated for two Academy Awards: Best Music, Original Score by Cole Porter for the song “Since I Kissed My Baby Goodbye.” The second was for Best Music, Scoring of a Musical Picture by Morris Stoloff.

-Fred Astaire appeared in two pictures with Hayworth. This film and “You Were Never Lovelier.” Though he liked dancing with Hayworth, he didn’t want to do any more pictures with her. He wanted to get away from being associated as a team with any particular actress, such as Ginger Rogers, according to “Encyclopedia of American Cinema.”
-Astaire said Hayworth danced with “trained perfection and individuality,” according to his autobiography “Steps in Time: An Autobiography.”
-The film had a working title of “He’s My Uncle,” according to “The Complete Lyrics Of Cole Porter.”

The Stars on the Film:
Rita Hayworth on the film:
-“The brass at Columbia had forgotten the fact that I was a dancer, until Fred Astaire, who knew my background, reminded them,” Rita Hayworth is quoted in the book “Hollywood Gold: Films of the Forties and Fifties” by John Howard Reid. “When Fred came to Columbia to make ‘You’ll Never Get Rich,’ they asked who they wanted as a dancing partner. Fred asked for me! That surprised me, but Fred knew what he was about. He knew my work. The film was a huge success and as a result, I was loaned out to Fox for ‘My Gal Sal.'”

Fred Astaire on the film:
Rita danced with trained perfection and individuality. Of course, she knew through experience what the dancing business was all about,” Fred Astaire is quoted in the book “Hollywood Gold: Films of the Forties and Fifties” by John Howard Reid. “That was apparent when I started working with her. I enjoyed making both ‘You’ll Never Get Rich’ and ‘You Were Never Lovelier‘ because of Rita.”

“She’s a natural. She’s constantly surprising me. Nothing is too difficult for her. She watches, goes up, practices up and the next day she has it perfect,” in the Oct. 1941, “Born to Dance-Together” in Movie Stars Parade.

Highlights:
-The film begins with Robert Benchley riding in a vehicle. He tells the chauffeur to slow down and we see the credits in the form of billboards along the road.
-The first musical number is an interesting dance number that mixes modern dance and tap dancing together.

-Fred Astaire and Rita Hayworth’s duet tap dance at the beginning of the film when Astaire is showing her how to do a dance in the show. The number show’s off just how good a dancer Hayworth is.

-Popular 1940s singer Martha Tilton shows up at the end as a specialty performance for the “Wedding Cake Walk” number. 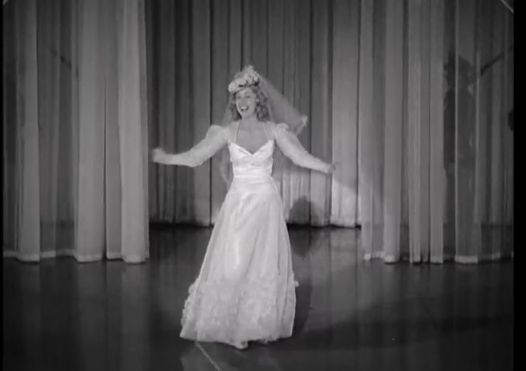 My Review:
The biggest point of interest with “You’ll Never Get Rich” is this is the film that made Rita Hayworth a star and showed Fred Astaire could have other dancing partners besides Ginger Rogers.
While Fred Astaire sings a few songs and we hear two songs from the Four Tones group, this musical seems to focus more on dancing. It’s a vehicle for Rita Hayworth, showing off how good of a dancer she is, so she isn’t dubbed like she is in musicals in the future.
The plot is a bit zany and runs on miscommunication jokes, however it’s a fairly cute and entertaining film. The thing that stands out the most are the excellent dancing numbers with Rita Hayworth and Fred Astaire. 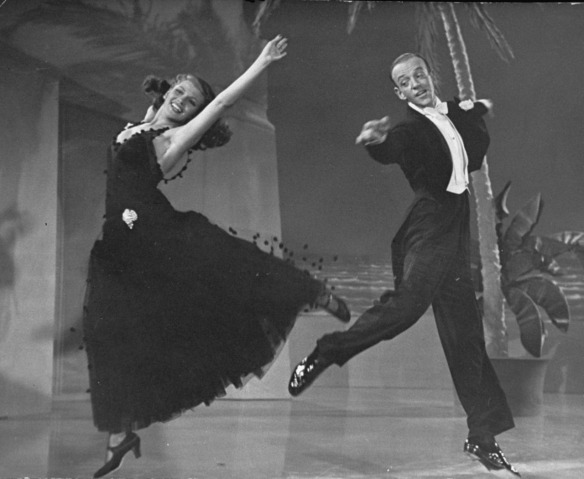 Rita Hayworth and Fred Astaire dancing in the “So Near and Yet So Far” number.