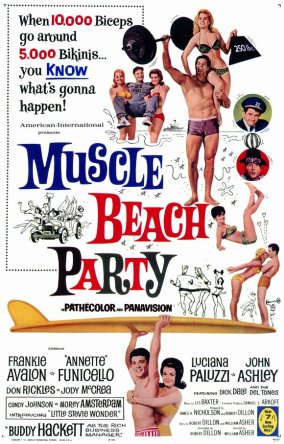 Plot:
Frankie (Avalon) and Dee Dee (Funicello) head to the beach for Easter vacation with their friends to surf, dance and have fun. Once they get to the beach they meet Jack Fanny (Rickles) and his group of muscle bound body builders. When Contessa Julie (Paluzzi) can’t woo Flex (Lupus), she tries to steal Frankie from Dee Dee.
Cheesy gags, music and dancing are sprinkled throughout the plot line.

Trivia:
-Stevie Wonder was 13 when he appeared in this film and was billed as “Little Stevie Wonder.”
-“Muscle Beach Party” cost $300,000 to make and grossed $12 million, according to The Encyclopedia of Surfing by Matt Warshaw
-The second beach movie directed by William Asher, following “Beach Party” (1964). This film was followed by “Bikini Beach” (1964), “Beach Blanket Bingo” (1965) and “How to Stuff a Wild Bikini ” (1965), all directed by Asher.
-The only beach movie that doesn’t feature Eric Von Zipper and his gang.
-Larry Scott, the body builder who played Rock, was an actual bodybuilder and was the first Mr. Olympia.

-Peter Lorre died two days before “Muscle Beach Party” premiered on March 25.
-In all of the beach movies, Annette Funicello wore more conservative bathing suits. That was out of her respect to Walt Disney who asked her to keep up a clean image, Funicello said in an interview.
-Donna Loren was signed to a multi-picture deal. The heads of American International were impressed with her duet with Dick Dale, Drive-In Dream Girls: A Galaxy of B-Movie Starlets of the Sixties by Tom Lisanti.
-During one scene, Peter Lorre and Frankie Avalon say the other looks familiar. This is a joke referencing their previous film they made together, “Voyage to the Bottom of the Sea” (1961).
-Most of the beach films only took two weeks to make, according to Beyond the Stars 2: Plot Conventions in American Popular Film edited by Paul Loukides, Linda K. Fuller

Highlights:
-Cartoon opening credits
-Surfing footage, especially when we are supposed to believe the stars are surfing.
-Candy Johnson’s 1960s dancing in her tasseled outfits
-Guitarist Dick Dale performing
-Cheesy humor like a cartoon cupid playing a harp beside Luciana Paluzzi as she’s looking at the bodybuilders.

Notable Songs:
-Muscle Bustle performed by Donna Loren and Dick Dale
-Happy Street performed by Stevie Wonder
-A Boy Needs a Girl sung by Annette Funicello (I noted this because it’s Annette’s only solo. It’s not her best song ever and ends abruptly, but worth noting). Reprised later by Frankie Avalon
-Muscle Beach Party sung by Dick Dale and the Del Tones
-Runnin’ Wild sung by Frankie Avalon

My Review:
I’m always surprised how Frankie and Annette end up together at the end of each film when she has to win him back from another girl.
So obviously none of the beach films have a serious, ground breaking plot and “Muscle Beach Party” isn’t excluded. All the silly plots also all occasionally blend together.
However, they are a great deal of fun. The outfits are great, the music is awesome and the dancing sequences on the beach are my favorite (especially if it involves Candy Johnson and Donna Loren). It’s a great snapshot of culture in the early 1960s. And Annette is one of my favorites so I can’t hate any of her films.
Compared to several of the films, I would say “Muscle Beach Party,” “Beach Party” and “Beach Blanket Bingo” are my three favorites.
So if you are looking for brainless, RIDICULOUS, hair-brained fun, check out this film…or any other beach movie.