Plot:
Married radio stars Kitty (Grable) and Jack (Dailey) Moran want to have a baby. After Kitty miscarries, the couple moves to television and tries to adopt a baby. 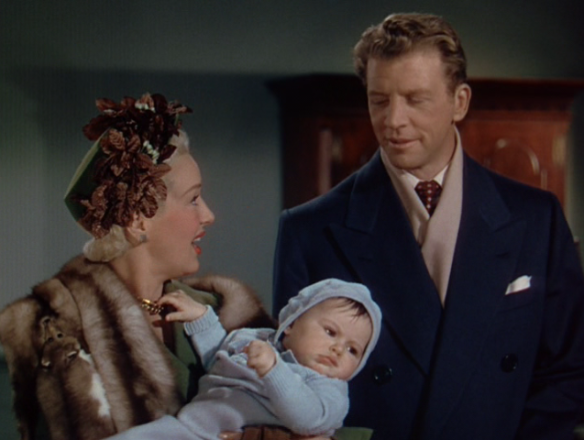 Betty Grable and Dan Dailey in “My Blue Heaven.”

My Review:
“My Blue Heaven” is a sweet, adorable and emotional little musical.
Two performers learn they won’t be able to have children after having a miscarriage, and try to adopt. However, this is during a time that it was difficult for performers to adopt children, because they seemed unreliable due unconventional work schedules and were more apt to divorce.
While a 1950 New York Times review ripped this to shreds calling it old fashioned, mishmash, I enjoy “My Blue Heaven.”
In the old fashion of her other films, Betty Grable shows off her beautiful legs and sells a song better than anyone else can. However, it also gives both Grable and Dan Dailey the opportunity to give an emotionally charged performance.
Grable shows her elation of pregnancy, and her despair when she loses a baby and as she struggles to adopt a child.
Along with their performances in this film, Grable and Dailey also are an underrated screen team. Starring in four films together, their chemistry is always through the roof.
The topics in this film is also interesting for two reasons:

Mitzi Gaynor in “My Blue Heaven.”

-As shown in other films such as “Close to My Heart” (1951) and “Blossoms in the Dust” (1941), adopting or promoting adoption was taboo during this time, because parents wouldn’t know what sort of background these “foundlings” came from. However, “My Blue Heaven” doesn’t really focus on that aspect.
-The lead characters are television stars at a time that TV was a large threat to films (and still is).
It’s also fun to see Mitzi Gaynor in her first film role playing a not so savory woman.
My Blue Heaven is heartwarming; making me smile at one point and tear up at the next.