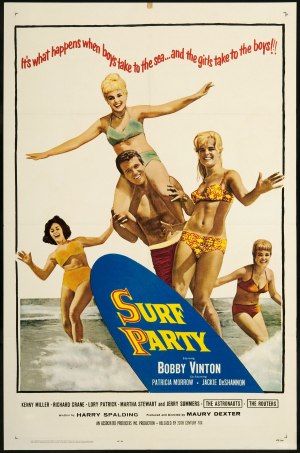 Plot:
Three girls drive from Arizona to Malibu, CA, for vacation, learn how to surf and find one of the girl’s brothers who she hasn’t seen in a long while.

Trivia:
-Surfers Mickey Dora and Johnny Fain are extras in the film.
-Rather than setting up actors against a screen for their surfing, actor Kenny Miller stood on the back of a speedboat, pretending to surf, as it rode through the water, according to Hollywood Surf and Beach Movies by Thomas Lisanti.

Notable Songs:
-“Crack Up” performed by the Routers

My review:
Thank goodness this was only an hour and seven minutes. But maybe it would have been better had this film had a slightly higher budget and could have hired better male leads.
Part of this low budget gives you one of the few black-and-white surf films. The fact that this film is in black-and-white is really the only thing I found notable about “Surf Party.”
Another noteworthy feature is that this was singer Jackie DeShannon’s first films. Unfortunately, she only got one song and it’s pretty silly: a gospel-esque song about surfing, “Glory Wave.”
The rest of the cast is lousy and the story is pretty melodramatic, complete with battling surfers, coerced innocent girls and surfing stars living in the homes of rich older women.