Trivia:
-Remake of the 1927 Al Jolson film The Jazz Singer, but with new songs.
-Doris Day was originally offered Peggy Lee’s role, but Day turned down the role. Just coming from “I’ll See You in My Dreams” with Danny Thomas, she felt it was too soon for them to be recast, according to TCM host Robert Osborne.
-Danny Thomas did not make another film after this movie, according to Osborne.
-Ray Heindorf and Max Steiner were nominated for an Academy Award for Best Music, Scoring of a Musical Picture 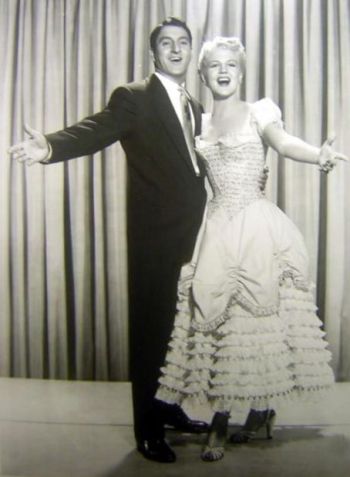 Danny Thomas and Peggy Lee in “The Jazz Singer” remake.

My review:
This lengthy, full sound and Technicolor remake of the 1927 “Jazz Singer” is visually lovely but is a tad dull story wise. In my opinion, the original film is dull but is important because of its influence on sound in music. But this 1952 remake doesn’t really pack any sort of punch and is overly long.

The songs by Sammy Fain, Cole Porter, Richard Rodgers and Lorenz Hart are toe-tapping-worthy, but all seemed like pretty safe songs for well-known, talented singers like Peggy Lee and Danny Thomas.

While Doris Day didn’t take the role, Peggy Lee seems to have been groomed to sound like her. While Lee talked and sang, I could picture Day in the role.

I also love Danny Thomas and adore the film “I’ll See You in my Dreams,” but he never seemed as comfortable in his films as he did in television, where he ultimately his largest success.

While this movie it’s a terrible movie, it’s not one that I would want to watch over and over again mainly due to how long Warner Brothers dragged out the story. I feel many of the early-1950s Warner Brothers color musicals-particularly the biopics- like this one tried too hard and ended up falling flat.