It’s no secret that the Hollywood Comet loves musicals.
In 2010, I revealed I had seen 400 movie musicals over the course of eight years. Now that number is more than 500. To celebrate and share this musical love, here is my weekly feature about musicals. 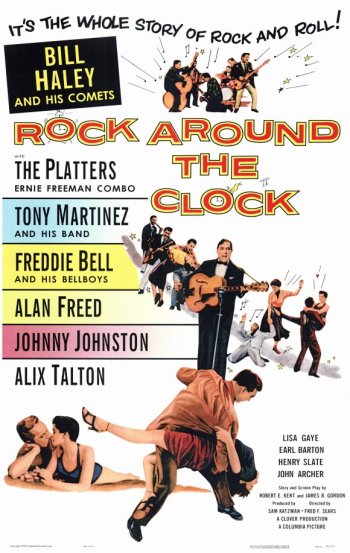 Plot:
Fictional film about how rock and roll music is discovered. Band manager Steve Hollis (Johnston) observes how a band with a new sound draws teenage dancers when they felt dance bands were dead. The band the kids are dancing to is Bill Haley and the Comets and Hollis sets out to promote them. However, booking manager Corinne Talbot (Talton), who was jilted by Steve, is set to have the band fail.

Trivia:
-This is considered the first major rock and roll musical.
-Queen Elizabeth II requested a print of this film to learn more about rock n’ roll after the movie was released. While on vacation in Scotland at Balmoral Castle,she asked for it to be flown in for a special showing. The film was banned in some British cities before Queen Elizabeth saw it, according to a Sept. 22, 1956, Louella Parson’s article by Louella Parsons. Bill Haley later performed for Queen Elizabeth in 1979.
-The New York Times wrote there were teenage riots when the film was released. In Great Britain and America, teens danced in the aisles, clapped to the music, tore up the seats and shouted they wanted “We want Bill,” according to the book Cliff: An Intimate Portrait of a Living Legend by Stafford Hildred, Tim Ewbank. In Oslo, Norway there were teen riots outside the theater and in Belgium, Germany, teens through tomatoes and eggs at the police station, according to Rebels and Chicks: A History of the Hollywood Teen Movie by Stephen Tropiano
-Haley starred in a sequel to this film called “Don’t Knock Rock” the same year. 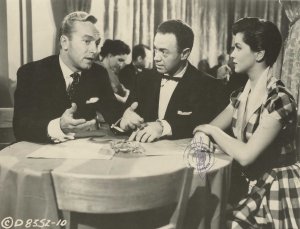 Johnny Johnston, Alan Freed and Lisa Gaye in “Rock Around the Clock”

My review:
If you are a fan of 1950s rock and roll or music history, “Rock Around the Clock” should be added to your must-see list.

The plot is fairly thin but ties in well with the musical performances. It’s also relevant for that time. While rock and roll seems pretty common place now, there was some push back and it was seen as rebellion from teens to adults. The riots and banning of this film when it was released exhibits this idea.

The plot looks at how mainstream band managers and booking managers were reluctant to take a chance on such a radical departure from the dance bands of the 1940s and early 1950s, which were dying out in popularity by this time.

Though qualified as a b-film, “Rock Around the Clock” is also important as film’s first rock and roll musical and was notable enough for Queen Elizabeth to screen the movie to learn what rock and roll is all about.

The lead actors in this film-Johnny Johston, Alix Talton and Lisa Gaye-aren’t anything to write home about but are adequate enough to carry the plot.

But the real stars of the film are the musical performers: Bill Haley and the Comets, The Platters and the Bellhops.

The only musical performances I was not keen on was Tony Martinez and His Band. After listening to Xavier Cugat for years, Tony Martinez sounded like noise.

“Rock Around the Clock” has great music and terrific jive dance numbers; a must see for music lovers. 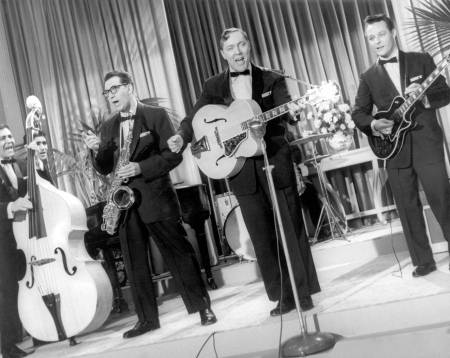