Plot:
Hallie Rogers (Watson), who dances as a go-go dancer on a variety show, will stop at nothing to become a pop star. During one show, she starts wildly dancing and grabs the microphone from the singer–who happens to be Glen Campbell–and starts singing. Hallie obviously gets fired, but learns that the wild dance she did on stage is now all the rage called “The Trantrum.” Hallie teams up with faded pop singer Cliff Donner (Peterson) to create a boy/girl performing duo. Eccentric millionaire music promoter Tony Krum (McDowall) works to make the two famous as a romantic, singing couple. The only problem is Cliff really is in love with Hallie but she is too focused on her fame to give it up for love.

Roddy McDowall in “The Cool Ones”

My review:
New York Times film critic Bosley Crowther wrote “I venture to guess this will disgust even the kids” in his May 11, 1967, review of “The Cool Ones.”

Crowther most likely hit the nail on the head. “The Cool Ones” has earned a place on my list of the worst movies that I have ever seen. But then at the same time, it’s so bad you can’t look away and have to watch the whole movie.

The stupidity of this movie isn’t necessarily the story line or even the cast. For me, it’s the leading lady: Debbie Watson. Her lines and songs are all shouted and she’s simply annoying. “The Cool Ones” isn’t her first offense either. Ms. Watson was equally as bad in her role as Tammy in the last of the “Tammy” film series, “Tammy and the Millionaire” (1967). 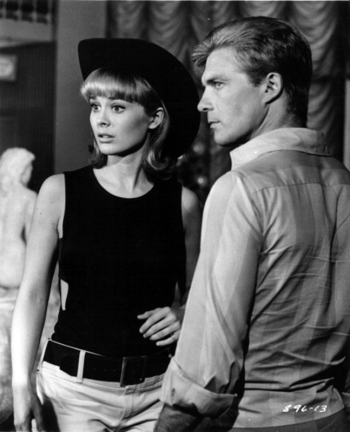 Debbie Watson and Gil Peterson in “The Cool Ones”

Watson is so overly dramatic that I can’t even be sympathetic with her character, who is the main focus of the film. For example, when she first asks Cliff if he will team up with her, he says “I’ll think about it,” and she flips her lid and pushes him in the pool.

Roddy McDowall’s character is probably the high spot of the film as the over-the-top, kooky record producer. Though McDowall doesn’t appear until halfway through the film. We even get to hear McDowall sing a bit. It’s also fun to see Phil Harris–husband of actress Alice Faye and frequent Disney character voice–though his character isn’t the most friendly.
You also get to see singer Mrs. Miller in her only film appearance.

It’s almost a shame that this teen, rock-n-roll comedy is so terrible. It’s very colorful and very late-1960s. I didn’t go to this thinking it would be “West Side Story” but at least it would be on the same level of fun as an Elvis movie.

Perhaps “The Cool Ones” wouldn’t have been as painful if there has been a different lead actress. Maybe a Shelley Fabares or Nancy Sinatra would have been better.
Regardless, there is nothing “cool” about “The Cool Ones.”