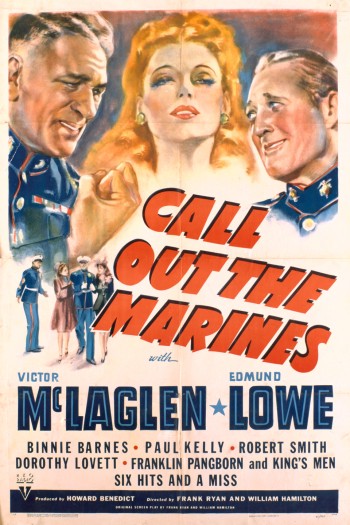 This week’s musical:
“Call Out the Marines –Musical #538

Plot:
Two ex-Marines are reunited at the racetrack where one is sanitation worker and the other a manservant to a grouchy old man. The two decide to rejoin in the Marines and spend a great deal of time at the Shore Leave Club and fight over hostess Vi (Binnie Barnes). Little do they know that Vi and the club’s owner (Paul Kelly) are working against the United States government.

Trivia:
–Every time Edmund Lowe and McGlauglin are with Marines, they are standing in front of a screen. Such as when they are commanding men and shooting
-Martha Mears dubbed specialty performer Dorothy Lovett 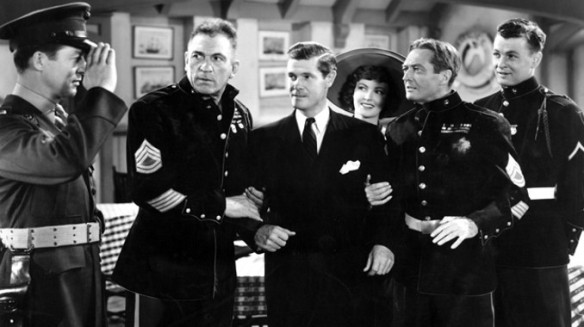 McLaughlin, Kelly and Lowe in “Call Out the Marines.”

My Review:
When I started watching “Call Out the Marines,” I wasn’t aware that it was a musical. But the word “musical” could be used very lightly with this one.

The hour long film is more of a comedy with a few forgettable songs thrown in and none of them are performed by the primary stars–McLaglen, Lowe, Barnes or Kelly.

The songs and performances are a little odd, for example a big deal is made about the performer Zana Zaranda, played by Corinna Mura. Soldiers chant for her to come out and sing and then another group sings a song to her picture, but she is only on camera during her one number.

A great many of the jokes are tiresome and go on too long. For example, one deals with a man who mumbles and no one can understand him. However, it goes on for a good five minutes.

I love Victor McLaglen and it was a little disappointing to see him in such a piddly, irritating film. The film is forgettable and I wouldn’t bother with it if I were you.