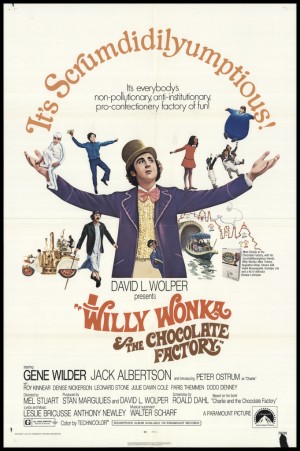 Plot:
The mysterious Willy Wonka (Wilder) holds a contest for five town members to enter his candy factory for a tour for anyone who finds a golden ticket in a chocolate bar. The tour of the factory is disastrous for some of the misbehaving children on the tour. While most of the children are spoiled brats, the main character Charlie (Ostrum) comes from a poor family and takes his Grandpa (Albertson) on the tour.

Trivia:
-Director Mel Stuart wanted to make the “Willy Wonka” into a film after his 12-year-old daughter said she read it three times and wanted her father to make it into a film, according to “Pure Imagination: The Making of Willy Wonka and the Chocolate Factory” by Mel Stuart, Josh Young
-Joel Grey was considered for the role of Willy Wonka, according to Reel Culture: 50 Movies You Should Know About by Mimi O’Connor
-The film sponsored by Quaker Oats to promote the candy bar, the Wonka Bar. In 1988, Nestle bought the rights to use the Wonka name, according to O’Connor’s book.
-The chocolate rivers was made of melted chocolate ice cream and water, according to O’Connor’s book.
-Based on the Roald Dahl book, “Charlie and the Chocolate Factory”
-Remade in 2005 with Johnny Depp 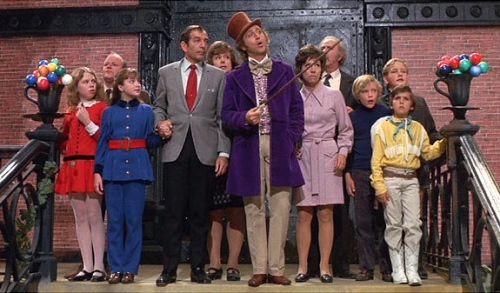 Awards and Nominations:
-Nominated for the Academy Award for Best Music, Scoring Adaptation and Original Song Score in 1972
-Gene Wilder was nominated for a Golden Globe for Best Actor in a Motion Picture – Comedy or Musical

My review:
“Willy Wonka and the Chocolate Factory” wasn’t the planned film that we were going to feature this week for Musical Monday. However, Comet Over Hollywood switched gears to honor Gene Wilder who passed away at age 83.

Before revisiting “Willy Wonka” on Aug. 29, 2016, I probably hadn’t watched this movie since 1996 when I was about eight years old. As a child, I never really cared for the story though we seemed to watch the movie a good bit at my house. Roald Dahl’s story was weird and a little creepy with little girls plumping up into blueberries and little boys drowning in a river of chocolate. 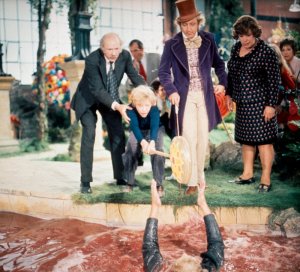 Augustus gets sucked way in the chocolate river as Charlie and Grandpa try to help him.

While “Willy Wonka” is still not a favorite of mine, Gene Wilder’s performance is what makes the film interesting.

Author of the “Wonka” book Roald Dahl was disappointed that the film focused more on Willy Wonka than Charlie, the impoverished boy who wins a tour with his grandfather. However, I’m okay with that.

With a twinkle in his eye, Wilder’s character brings humor and charm to the movie musical. Really the scenes I enjoy the most feature Gene Wilder. I also like Jack Albertson’s character as Grandpa, because he’s adorable.

While I can’t say “Willy Wonka and the Chocolate Factory” is a favorite of mine, it is colorful and filled with memorable songs. Sammy Davis, Jr, even had his only No. 1 hit with his adaptation of “The Candy Man,” which originated in this film. The song spent three weeks at No. 1 on the Billboard Top 100 in June 1972.

The film is also was a large part of childhood to many generations. That’s one reason it’s so hard to say goodbye to Gene Wilder, who passed way Aug. 29, 2016. Outside of “Willy Wonka” he starred in so many more memorable films leaving a void for fans that’s difficult to fill with any other actor.

Thank you for helping spark our “pure imagination” through your memorable roles. You will be greatly missed. 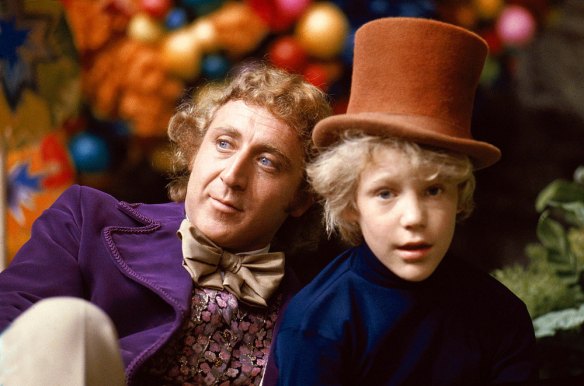