This week’s musical:
My Sister Eileen

Plot:
Sisters Ruth (Garrett) and Eileen Sherwood (Leigh) move from Ohio to New York City. Ruth wants to become a journalist and Eileen hopes to break into Broadway. They have a hard time finding jobs and making ends meet while living in a shoddy Greenwich Village apartment right above Subway construction. Ruth also spends much of her time feeling sorry for herself since she isn’t as beautiful as her little sister Eileen, who is swarmed by men.

-In 1953, a musical adaptation of the 1940s story called “Wonderful Town” premiered on Broadway. The music was written Leonard Bernstein with lyrics by Adolph Green and Betty Comden. Columbia felt the film rights to this version were too expensive so the story was rewritten for the screen and featured music by Jule Styne and Leo Robin. “All of them had a team of lawyers looking over their shoulders. Everything had to be cleared and approved legally,” Janet Leigh wrote in her autobiography “There Really Was a Hollywood

-Judy Holliday was originally cast as Ruth, but Betty Garrett ended up with the role.

-The script was written by Blake Edwards and Richard Quine, who also directed the film.

-Aldo Ray turned own the role of the muscular neighbor Ted, which went to Dick York.

-“My Sister Eileen” was Janet Leigh’s first project under contract with Columbia.

My review:
If it wasn’t for my Musical Monday feature, I would not have ever watched “My Sister Eileen” (1955) a second time.

As far as musical remakes of dramas and comedies go, this one is pretty bad. Based on a novel, the original “My Sister Eileen” premiered in 1942 starring Rosalind Russell as Ruth and Janet Blair as Eileen. It’s hilarious and charming.

In both stories, Eileen is gorgeous and Ruth doesn’t have a chance finding a man with her beautiful sister around. However, in the 1955 version, the plot focuses mostly on romance and both sisters finding romance. Unlike the 1942 version, the 1950s version casts just enough men for both leading ladies.

In the 1942 version, while Ruth would like romance, she is more concerned with her writing career and looking out for her little sister. Steve Daly of “Entertainment Weekly” noted some “1950s backlash” against feminists in the 1955 version in comparison to the 1942 version.

This movie was screened at the 2016 Turner Classic Movies Film Festival with Jack Lemmon’s son, Chris, helping present it. Of all films, I was surprised this one was selected to showcase Jack Lemmon’s career because it’s well…a lemon. Lemmon is also hardly in the movie. In an hour and 48 minutes, I would estimate he’s maybe in 20 minutes of the film.

Janet Leigh is a capable singer and dancer. According to Janet Leigh’s autobiography, choreographer Bob Fosse was pleased with her dancing skills. Dancers Tommy Rall and Bob Fosse perform some impressive dance numbers but they can’t save the film.  You also get to hear Dick York and Jack Lemmon sing. In my opinion, there aren’t any memorable songs and while the cast is relatively stellar, I enjoy the cast from the 1942 version more.

If producers had been willing to pay for “Wonderful Town,” I’m curious if the film would have been better. It’s hard to go wrong with a score by Leonard Bernstein (West Side Story) and lyrics by Betty Comden and Adolph Green (Singing in the Rain). Maybe with a Bernstein/Comden/Green score, some of the songs would have been memorable. The story was also rearranged, and I’m curious how it’s different.

Maybe I would think this was a better movie if I hadn’t already watched the original. I want to like it. It’s colorful and has a good cast, but I find it irritating. Maybe you will enjoy it better. 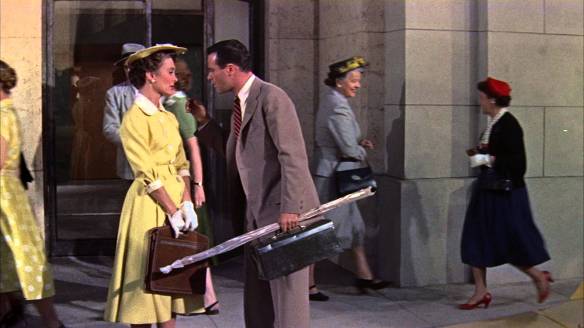