Plot:
Caroline (Durbin) is in love with Lt. Latham (Bruce), but her father Senator Frost (Collins) hates the lieutenant. When Senator Frost convinces President Polk (Earle) to send Lt. Latham to California to guard gold shipments, Caroline leaves Washington, DC, and heads west with a wagon train to follow Lt. Latham. She ends up sharing a wagon with Johnny Lawlor (Paige) who distracts her attentions from Lt. Latham.

Deanna Durbin in “Can’t Help Singing,” her first and only Technicolor film

Trivia:
-Deanna Durbin’s first and only color film. A Universal Studios publicity brochure said: “For the last eight years, Deanna has been in a black and white shadow on the screen before them. Now she is being brought to them in all the beauty of her natural coloring.”
-20th Century Fox built a fort for the film “Buffalo Bill” (1944) and Universal Studios rented this fort from Fox to use for this film.
-Filmed in Utah, because the mountains in California are brown and Utah’s green mountains photographed better in Technicolor, according to When Hollywood Came to Town: A History of Movie Making in Utah

by James D’Arc
-Film based on the story “Girl of the Overland Trail” by Samuel J. and Curtis B. Warshawsky

Deanna Durbin on location in Utah at the Cedar Breaks

My review:
Though Deanna Durbin is known for her operatic singing voice, her films made under contract to Universal put music secondary to the plot. For example, where most of Judy Garland’s films were filled with songs that mixed evenly into the plot, Durbin’s films will primarily be a comedy or drama where she sings two or three songs.

“Can’t Help Singing” is one of few Durbin films that is strictly a musical with western elements coming secondary. It’s her first and only film in Technicolor, features multiple songs from Durbin, songs from her leading man Robert Paige (this is also rare in a Durbin film. Many of her leading men were non-singers), and songs featuring other characters that help move the plot along. This musical was one of Universal Studios most expensive films.

This is a fun little musical because it does feature a great deal of humor and a pleasant romance between Durbin and Paige. I really enjoyed Robert Paige as a leading man in this film. My only complaint is that he didn’t sing more and that he wasn’t in more prominent films throughout his career.

Akim Tamiroff and Leonid Kinskey are there as a comedic duo, who thankfully aren’t tiresome or annoying.

Durbin’s film career started in 1936 and she left in 1948. As Universal’s top star, it’s a shame that this is her only Technicolor film, but not surprising. Color was still very expensive and not as common during this time. It really is a treat to see Deanna Durbin in color. She looks gorgeous, her costume are lovely and the backdrop of Utah is lush and colorful.

While not my favorite Deanna Durbin film (that’s 1941’s It Started with Eve) “Can’t Help Singing” is a lot of fun. Durbin’s lilting happiness in her songs will make you want to sing as well. 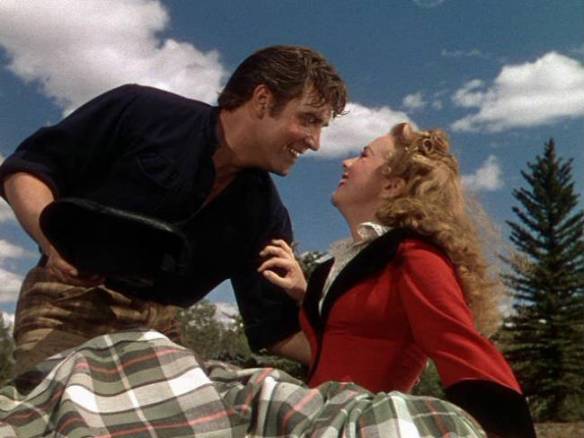