At age 4 in 1917, she made her first film appearance as an uncredited fairy in “The Primrose Ring.” Actress Loretta Young performed in 94 films from 1917 to 1989 and was the star of the successful television show, “The Loretta Young Show.” Young acted almost all her life, performing in her last role, the TV movie “Lady In A Corner” (1989), at age 76.

But we are focusing on Young’s second to last role: the TV movie “Christmas Eve” (1986). 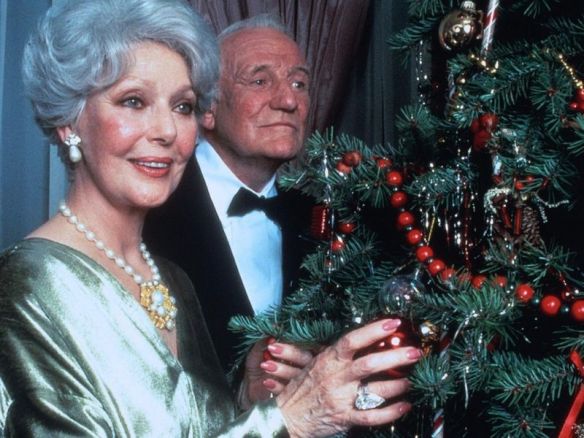 Young plays wealthy Amanda Kingsley, who dedicates her time to helping the homeless, taking in stray cats, reading to children and directing choirs. Her butler Maitland (Trevor Howard) is her begrudging but loving, sidekick and friend who accompanies her on these all-night outings of helping the needy.

Amanda’s good deeds are much to the chagrin of her wealthy, business-minded son, Andrew (Arthur Hill), who runs the family business empire. The two are constantly at odds, and he especially doesn’t like that she gives cash to the homeless rather than writing checks with no receipts, so the donations aren’t tax-deductible. Andrew is also estranged from his three children (Patrick Cassidy, Season Hubley, Wayne Best), who left home, and neither their father nor grandmother knows where they are.

Howard and Young serving the homeless on “Christmas Eve.”

After being diagnosed with an incurable illness that she keeps from her son, Amanda hires a private investigator Morris Huffner (Ron Leibman), to find her three grandchildren and bring them home by Christmas Eve. Amanda also changes her will to donate all of her money to build homeless shelters. Because of this, Andrew takes his mother to court to prove that she is mentally incompetent to handle her money.

“Christmas Eve” (1986) was Loretta Young’s first film or TV appearance — aside from Academy Awards shows — since 1963 when “The New Loretta Young Show” went off the air.

“God gave me 23 years to prepare for this part in this film,” Young said.

Airing on Dec. 22, 1986, on NBC Monday Movie Night, Young’s performance won her a Golden Globe in 1987 for Best Performance by an Actress in a Miniseries or Motion Picture Made for Television.

“It (the movie) took out football on Monday night,” said Loretta Young, according to the book “Hollywood Madonna: Loretta Young” by Bernard F. Dick.

Though Young had been absent from the large and small screen for more than 20 years, her performance in “Christmas Eve” is wonderful. She also looks wonderful (and I hope I look like her at age 73). She was costumed in a flattering silver wig, stylish suits and my favorite — a gold kaftan she wears on Christmas Eve. That kaftan may be one of my favorite parts of the film.

The character Amanda Kingsley is similar to Young as she exhibits strong faith. She helps the poor, tells a dying woman that she’s a “child of God,” and her Christmas tree is topped with a dove as a symbol of peace.

I was particularly excited to see Trevor Howard’s name in the credits of this film. Howard, who died two years later, who starred in films such as “The Third Man” and “Brief Encounter,” plays a reserved, proper English butler. Though Howard has a great deal of screen time, he doesn’t have many lines. Though he isn’t a very vocal character, Howard is my favorite part of this TV movie. He is a comforting figure who cares about his employer and goes along with her on crazy adventures, though he may not always agree. The most powerful and heartbreaking scene in the whole movie is when Howard’s usually stoic character breaks down after hearing about his employer’s serious illness.

The story itself is heartwarming; though possibly not original, it is an enjoyable and a quick 90-minute watch. The end is also written to make the audience teary-eyed.

While two Hollywood film legends lead the cast, the rest of the actors are great as well. Arthur Hill does a good job of making the audience dislike him. Hill’s type of greedy businessman character seems to be a villainous caricature that reoccurred throughout the 1980s.

Aside from the leads, Ron Leibman’s character as the private investigator was one of my favorites. Leibman is extremely likable and has no patience for the grandchildren’s excuses for not visiting their grandmother. Leibman eventually tells the third grandchild he visits that he and his siblings must not love their grandmother as much as they say since they don’t care to visit her.

This 1986 TV movie is apparently a reworking of the 1947 film “Christmas Eve” starring Ann Harding, George Brent, George Raft, and Randolph Scott, according to George Raft: The Films by Everett Aaker. The two are vaguely similar but not exactly the same. In the 1947 film, Harding is the mother to three adopted sons, who all live shady lives, and she is searching for the three of them. The 1986 version is much happier, and the grandchildren aren’t seedy.

I have wanted to see “Christmas Eve” (1986) for a long time, and I have never been so excited to find a movie on YouTube. This didn’t film didn’t disappoint. Though possibly sappy, I think it was made with enough heart so that it isn’t off-putting.