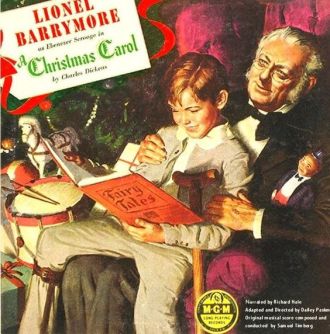 Multiple actors have played Ebenezer Scrooge in numerous adaptations of Charles Dickens’ story “A Christmas Carol.” But one actor performed the role every year, creating a 20 year tradition.

From 1934 to 1953, Lionel Barrymore came into homes over the radio as the miserly Scrooge who is visited by three ghosts as a warning to change his cruel ways.

John Barrymore took over for his brother in 1936 broadcast and Orson Welles performed the role in 1938.

Lionel Barrymore’s radio performance in “A Christmas Carol” is credited as making the Charles Dickens story popular in the United States, according to the book “The Man Who Invented Christmas” by Deckle Edge.

However, Barrymore never performed the role on screen. He was set to star in the 1938 Metro-Goldwyn-Mayer adaptation of “A Christmas Carol.” However, arthritis kept him wheelchair bound so he dropped out of the film. Reginald Owen starred as Scrooge, per Barrymore’s suggestion, according to The Christmas Encyclopedia by William D. Crump.

Barrymore’s Ebenezer Scrooge is entertaining, but his delivery is similar to many of his other crotchety characters, such as Mr. Potter in “It’s A Wonderful Life” or Dr. Gillespie in the Dr. Kildare series. You can hear his performance in the 1939 “Christmas Carol” performance on the Campbell Playhouse, directed and narrated by Orson Welles with music conducted by Bernard Herrmann: 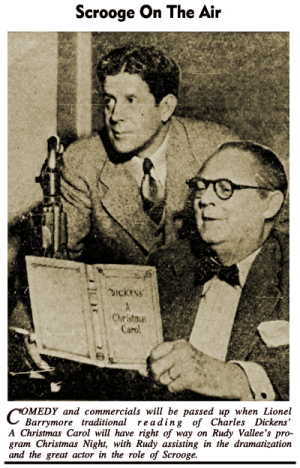 Many of the broadcasts aired the week of Christmas:

1 thought on “A Christmas Tradition: Lionel Barrymore as Ebenezer Scrooge”