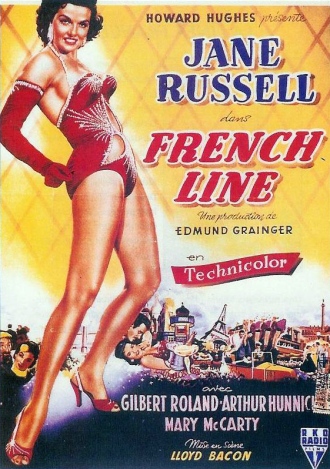 Plot:
Oil heiress Mary Carson (Russell) is jilted by her fiancé Phil (Stevens). Fed up with men being intimidated by her millions, Mary takes a cruise on the French Line posing as a model and her friend poses as her. She wants to see if a man will love her for her personality (and not money) or if they will go for the girl who they believe is rich.

Trivia:
-Filmed in 3D with advertisements like “Filmed in 3 dimensions — and what dimensions” or “She’ll knock both your eyes out”

The main costume that upset the censors, designed by Howard Greer, and worn during the “Lookin’ for Trouble” number

-The censors were upset with the song and dance number “Lookin’ for Trouble” due to a skimpy one pieced costume. The front middle section was nude colored, making it resemble a bikini. Film censor Joseph Breen viewed the film and said the film had to be drastically altered as it “exceeded the Production Code limits of breast exposure,” according to Dame In the Kimono Hollywood Censorship

-Archbishop Joseph E. Ritter of St. Louis wrote an emergency letter to be read in Catholic churches in St. Louis two days before the premiere. Ritter also wrote a letter to be read at New York mass saying that anyone who saw “The French Line” would fall “under penalty of mortal sin,” according to Leff and Simmons’ book.

-The film premiered in December 1953 in Missouri but did not premiere in New York until May 1954.

-Film censor Joseph Breen retired in 1954, and “The French Line” was one of the last movies he worked to censor, along with “The Moon Is Blue 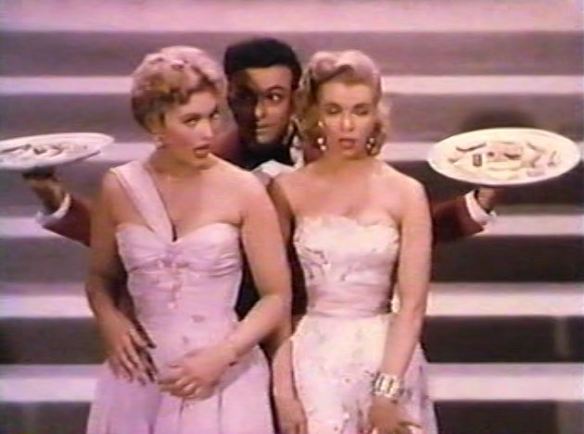 Kim Novak (left) in her first film role. She is only in one shot during the “Poor Andre” number

My review:
In 1953, going to see Jane Russell in 3D in “The French Line” was seen as a sin by some church and moral groups. While many films condemned from the 1930s through the 1950s by the Production Code seem tame by today, this one is no different.

Jane Russell in a tub shot at the beginning of the film. Censors said The French Line had too much breast exposure throughout the film.

But the difference is who was filling these costumes. Jane Russell had something these other actresses didn’t — a 34D chest. RKO producer Howard Hughes did all he could to capitalize off of this fact, including shooting the “French Line” in 3D. Aside from one piece costumes, Russell sings a song with Theresa Harris while she is undressing, gets in a tub, and redresses. She’s hidden behind mirrors, towels and bubbles. While the audience didn’t see anything and this isn’t a new type of scene, it was obvious that Hughes was trying his hardest to titillate the audience.

The straw that broke the camels back is the number “Lookin’ for Trouble” where Russell wears a one-piece black costume that has a full back and three areas cut out in the stomach area.
(As an aside: during my research, I read many sources who said Jane was scantily clad” and wore a “glorified bikini.” I wouldn’t call this costume a bikini.)

A sign advising Catholic Patrons in Union City, New Jersey, not to see The French Line as it was “Totally Condemned” by the Catholic Legion of Decency.

Because of this, censor Joseph Breen (who was about to retire) said certain aspects of the film had to be edited, and Catholic Decency League banned the film. A letter was also read at Catholic masses saying that if anyone saw it, saying they would fall under penalty for mortal sin. Due to censors, the film was also banned in New York for five months. The film premiered in December 1953 in Missouri but did not premiere in New York until May 1954.

The film did well in theaters, but the critics didn’t like it. Bosley Crowther wrote in his May 15, 1954:

“There’s no use pretending about this picture. It’s a cheap, exhibitionistic thing in which even the elaboration of the feminine figure eventually becomes grotesque. It looks as though someone had the notion that a very low and rather tight bodice, continued through numerous costume changes, is worth more than anybody’s script.”

And while the film’s star is oversexualized, that isn’t how Jane Russell enjoyed her life. She was happily married to her high school sweetheart, Bob Waterfield, and a devout Christian. She later said she hated the songs and costumes.

Away from the controversy, “The French Line” is a pleasant little film. The same story was seen on screen in 1934 with The Richest Girl in the World starring Joel McCrea, Fay Wray and Miriam Hopkins. It’s the age ole tale of a rich girl unable to find love because either fortune hunters want her money or men are intimidated by her wealth. So she goes incognito with a friend posing as her to see if someone will fall in love for who she is or go for the friend they believe is rich.

Jane Russell’s leading man is Gilbert Roland who is pleasant. Roland performs some songs, which sounds like his voice but I can’t find a confirmed source that says if he was dubbed or not. One website suggested he was dubbed by Bob Monet, but even they were not certain. If he did sing, he did well.

But other than Gilbert Roland and Russell’s ranch hand Arthur Hunnicutt, there aren’t many other names you will readily recognize in the supporting cast. Actress Mary McCarty plays Russell’s fashion designing friend and Joyce Mackenzie plays Jane Russell’s friend who poses as her. They’re performances are adequate but not amazing.

One noteworthy actor to look for in this film is Kim Novak who appears on camera twice as a model during the “Poor Andre” number.

As far as songs go, nothing really stands out as memorable. I couldn’t even tell you how the condemned “Lookin’ For Trouble” tune goes if I was asked to hum it. The lyrics discuss popping all the corn in Nebraska and melting all the ice in Alaska. It wasn’t scandalous to me, just rather stupid.

The censorship aspect is an interesting look at history but you forget about it while watching the movie. It’s really pretty silly that Jane Russell’s performance was said to determine the eternal fate and souls of the viewers.

It’s obvious throughout “The French Line” how hard Hughes worked to sexualize Russell’s costumes and dances, but overall it’s an innocent little story which is fun to watch. I really enjoyed this film when I saw it for the first time in high school and enjoyed it just as much revisiting.