Plot:
A group of desert bandits, lead by Paul Hudson (Morgan), work against Nazis in Morrocco who want to build a railroad for the Axis. 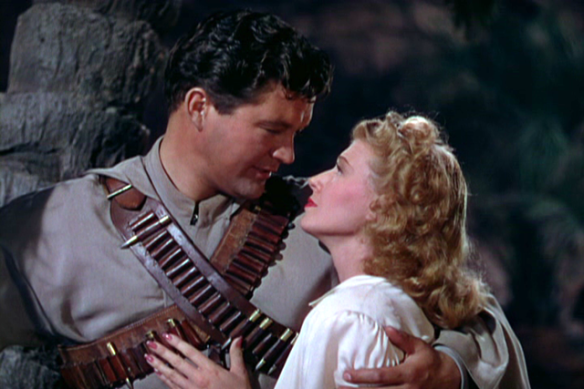 Trivia:
-Prior to it’s 2014 DVD release, this film was difficult to see due to a copyright issue with one of the songs in the film.
-This is one of several film versions of “Desert Song.” The first was in 1929 starring John Boles and Carlotta King, and another in 1953 starring Gordon MacRae and Kathryn Grayson. Since this was filmed during World War II, the Nazi aspect would be added.
-The remake had been planned since 1936, according to The Star-Spangled Screen: The American World War II Film by Bernard F. Dick
-New songs added to the film were “Fifi’s Song,” “Gay Parisienne,” and “Long Live the Night.”

My review:
The Desert Song (1943) is a visually gorgeous and lush Technicolor musical. It is has a jaunty, heroic plot with lovely music.

But this film is special to me, and not because of any of the songs or the plot. It’s because of the circumstances of when I first saw it. 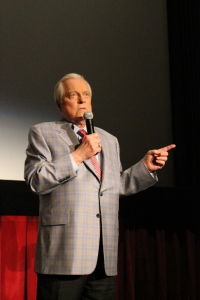 It was my first-time attending the Turner Classic Movies Classic Film Festival in 2013. I was excited to see this musical because it was one I had never seen. And while waiting in line to get into the theater, the film festival volunteer confided that she heard Robert Osborne would be introducing the movie. Excited to get a closeup view of my idol presenting a film, I sat in the front of the theater. It wasn’t a highly attended movie and no one was sitting around me, but I sat in my seat quivering with excitement.

Then there he was, discussing “The Desert Song” (1943) only a few feet away. Robert Osborne told how the film hadn’t been seen in 50 years because of copyright issues — the film was finally released on DVD in 2014. Since this was a rare screening, Osborne said he was looking forward to this film the most at the festival. And since he had never seen it, he would be joining the audience to watch the film. As the colorful screen flashed on the screen, I could hardly concentrate, knowing Robert Osborne was behind me. And after the film, I had the opportunity to meet him briefly.

Prior to “The Desert Song” (1943), I had only seen the 1953 remake with Kathryn Grayson and Gordon MacRae, which is slightly different and doesn’t include Nazis.

Aside from my personal experience with this film and its previous rarity, what’s special is that it’s an early-1940s Warner Brothers in color – that’s also a rarity. And it’s gorgeous to look at. Each studio held a slightly different quality: MGM was magic and cheer, Fox had this humming and glossy happiness to it, but Warner Brothers had a slightly grittier feel. And that grit mixed with a musical makes an interesting and satisfying combination.

Leading lady Irene Manning isn’t a well-known actress today and is okay. I do wish there was a stronger leading lady. It’s Dennis Morgan who is the highlight here. Morgan is handsome, sings beautifully and is a wonderful hero of the film. The film has a wonderful supporting cast with Bruce Cabot and the fabulous Faye Emerson.

“The Desert Song” has some beautiful songs and an intriguing plot. While I may prefer the 1953 version, the 1943 version is something special. It’s a little-seen film that you should catch if you can. Turner Classic Movies is airing “The Desert Song” on Thursday, Aug. 24, at 8 p.m. ET. Don’t miss it if you can help it.