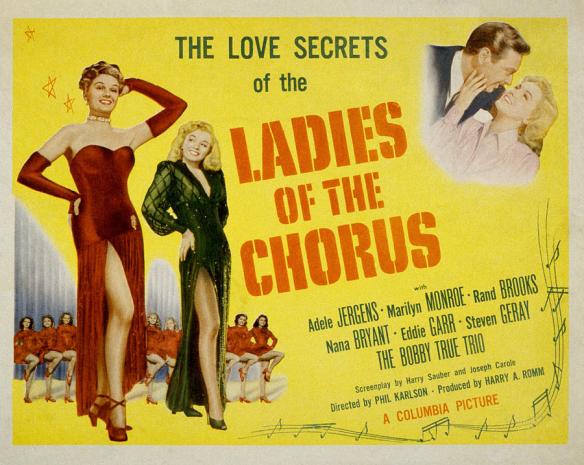 Plot:
May Martin (Jergens) and her daughter Peggy (Monroe) are both chorus girls at a burlesque theater. May is protective over Peggy, not wanting her to go out with “stage-door Johnnys.” When the head of the show walks out, Peggy becomes the main attraction and captures the interest of wealthy Randy Carroll (Brooks). Will his society family accept Peggy if they find out she is a burlesque queen? 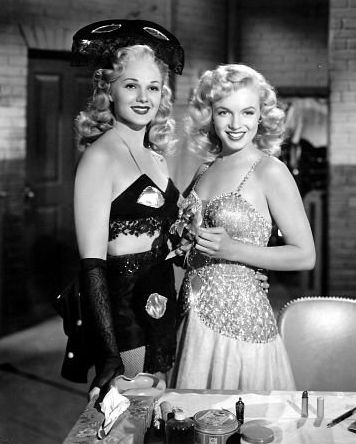 My review:
“Ladies of the Chorus” is a very light, entertaining film. It may not have much of a plot, but that’s okay because the film is only an hour long.

You have a chance to see Marilyn Monroe early in her career before she was groomed by the Hollywood machine. Not only is this her first starring role, it is her first credited performance. Her voice is bright and sweet, and not quite as deep and breathy like it is later in her career. While Monroe is certainly beautiful in this film, this is before she became “sex symbol.” I enjoyed her songs in this film, because rather than singing in that breathy, sexy way, she exhibited real musical talent.

I’m a little surprised that Adele Jergens, only 31 at the time, would agree to play a gray-haired mother to 22-year-old Monroe (her character wears a blonde wig for performances). But Jergens said later she and Monroe bonded during the film.

While knowing this was a B-budget film shot in less than two weeks, I still had a hard time swallowing Rand Books (Scarlett O’Hara’s first husband in Gone with the Wind) as our romantic leading man. 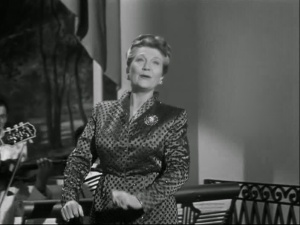 But while Adele Jergens and Marilyn Monroe carry the movie and are wonderful, the actress playing Rand Brooks’ mother steals the show: character actress Nana Bryant. Bryant is a wealthy society mother. The audience predicts that Bryant will be a snooty, society lady, but instead, she ends up letting her hair down and welcoming Jergens and Monroe with open arms. She even accepts them by putting her own reputation at risk. Bryant even talk/sings a song!

This is a fun little film, but Columbia ended up dropping Marilyn Monroe’s contract. While puzzling, she ended up landing on her feet (career wise) in the future.

“Ladies of the Chorus” is a brisk, sweet musical comedy. While Marilyn Monroe isn’t the steaming “sexpot” people later came to know, you see her here as a gleaming young, sweet actress probably never expecting the stardom that lie ahead.