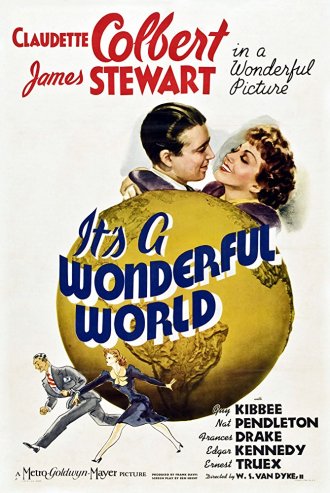 Plot:
Wealthy Willie Heyward (Treux) is accused of murder and his private detective Guy Johnson (Stewart) is arrested for obstruction of justice for hiding Heyward after the murder. Johnson escapes the police by jumping off a train, and poetess Edwina Corday (Colbert) witnesses his escape. Guy kidnaps Edwina so she won’t report him to the police as he tries to continue to clear Heyward of murder.

• Claudette Colbert was in three films released in 1939 and James Stewart was in five.

• Claudette Colbert was unhappy at the brisk pace that the film was shot. She was used to being able to take her time at her home studio of Paramount.

My review: Searching for the “1939 feature”:
With this 1939 film, “It’s a Wonderful World” places Claudette Colbert in a similar situation we found her in back in 1934 with “It Happened One Night.” Colbert is traveling with a man to evade another group of people. However, this time it isn’t by her own free will. This man, played by James Stewart, is wanted by the police but escapes arrest in order to solve the crime. 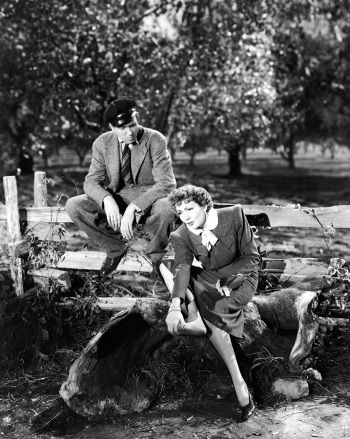 Going into the film you think that it couldn’t be better cast: Claudette Colbert and James Stewart – two actors that seemingly fit well with any costar…except with each other. They just don’t seem to fit. The two eventually are supposed to be romantically involved, which isn’t believable anyhow, but it’s a constant see-saw of loving or hating one another.

This screwball comedy starts off promisingly, but the script plays both characters too extreme. Stewart is teeth-grittingly cynical and Claudette Colbert’s character is shrill and rather whiny. She is always “swearing by her eyes.” (Which is supposed to be funny, but it got old).

This was Claudette Colbert’s first film for MGM. She later said she did not care for “It’s a Wonderful World” and found the quick, one-take shooting disconcerting, compared to her home studio of Paramount where she was able to take her time and work with cameramen to get the best shot, according to James Stewart: Behind the Scenes of a Wonderful Life

“Speedy Van Dyke, as he was known, shot the film in something like two weeks, and it looked it too!” Stewart said in an interview with Quirk.

I’m reluctant to say I dislike this film, because I really don’t but it is hard to like. It’s more so disappointing. There are some funny scenes, though, like when James Stewart dresses up like a scout leader.

In the grand scheme of 1939, the storyline and brisk-paced comedy is similar to other films released during this time. However, it feels like Herman J. Mankiewicz and Ben Hecht quickly slapped a story together that was then shot by W. S. “One Take Woody” Van Dyke. The production of the film feels as rushed as our lead characters do during their police chase.