Plot:
Belita (Belita) is a refugee from Holland due to World War II working as a waitress at a Californian resort. When the hotel’s star dancer Dolores (Woodell) quits to get married, the hotel’s entertainment manager Jerry Gibson (Ellison) hires Belita to take her place. Belita becomes a great success while Jerry gets fired from his job and then is drafted into the Army.

Trivia:
-Ice skater Belita’s first credited film role. Belita was an Olympic figure skater, who competed for the United Kingdom in the 1936 Winter Olympics. Belita was also a trained ballet dancer.
-The water ballet sequences were filmed at Arrowhead Springs Hotel in Lake Arrowhead, CA, according to the Hollywood Reporter in 1943.
-Acquacade numbers supervised by Olive Hatch, who was an Olympic swimming champion.
-The March 1943 Hollywood Reporter originally announced that Paul Whiteman and Kenny Baker would be in “Lady, Let’s Dance,” but neither were in the completed picture. 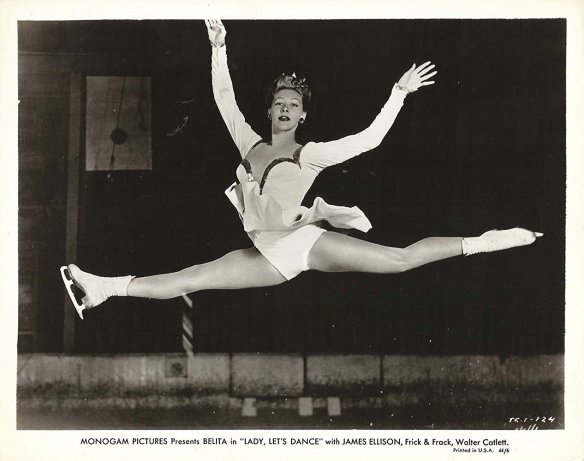 Belita in the patriotic finale of “Lady, Let’s Dance.”

Highlights:
-Belita ice skating
-Water ballet at the beginning of the film

My review:
When it comes to an ice skating movie, it’s difficult not to automatically compare it to a 20th Century Fox Sonja Henie film. Monogram’s “Lady, Let’s Dance” is of course of a lower production value than a Sonja Henie film, but Belita’s debut isn’t any less fun.

Like Henie, Belita was an Olympic ice skater. She competed for the United Kingdom at age 12 in the 1936 Olympics. But along with ice skating, Belita was also a trained dancer in classical Russian ballet dancing, which shows in her graceful ice skating.

“Lady, Let’s Dance” showcases both Belita’s ice skating and ballet dancing prowess. Belita is featured in about three dance numbers and three ice skating numbers. Belita even tap dances in her ice skates at one points (take that Gene Kelly and Fred Astaire!) Belita is lovely, but her acting in this film isn’t great. It does seem to improve in film noirs she later starred in.

James Ellison as the leading man is adequate, as always, but he is honestly not in the film very much. Surprisingly Walter Catlett, who plays the hotel owner, is adequate. 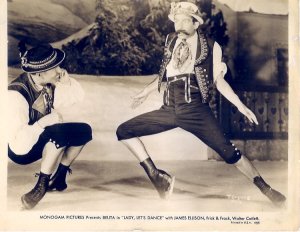 The film has a total of five ice skating numbers, with the other two featuring comedic ice skaters Frick and Frack (or Werner Groebli and Hans Mauch). Usually the idea of numbers like Frick and Frack would annoy me (especially if they were in the same vein as the Ritz Brothers), but these two didn’t. I wouldn’t say the numbers were funny, but more interesting to see the amount of skill the two men had to have to skate in a bad or clumsy manner. My main concern was that everything looked like a knee or ankle injury!

At the start of the film, we even get to see a bit of synchronized swimming. From swimming to ballet to ice skating, this film offers a grab bag of novelty entertainment and art.

While “Lady, Let’s Dance” is a musical, none of the lead actors sing. The music comes from the dance bands of Henry Busse and His Orchestra, Mitchell Ayres Orchestra, and Lou Bring and His Orchestra, and all the singers for the songs are off-screen. While that isn’t how the traditional musical is performed, I would still very much consider this a musical with the amount of ice skating and dance numbers it contains.

I bought this film from Warner Archive specifically if I could see it. If it wasn’t for Warner Archive, I’m not sure how else I would have accessed it. The DVD print was clear and crisp.

The only thing that bothered me about this movie were the costumes. That seems like a silly thing to complain about, but none of them seemed very flattering on Belita. In the number featuring the title song, “Lady, Let’s Dance, she wears a long black dress and at first you can’t see what she’s doing. Belita does remove the skirt, but it just felt like an awkard costume choice.

“Lady, Let’s Dance” isn’t your top tier musical (though it was nominated for two Academy Awards) but it’s a great deal of fun, especially if you enjoy ice skating.

Our friend Laura G., who suggested I see this movie, reviewed this film in 2015. Check out her review.