Plot:
When Eddie Kerns (Murphey) sells his song and is offered a job to perform it in a show, he calls his girlfriend Molly Mahoney (Blondell) and tells her to join him in New York. Molly Mahoney and her sister Pat (Turner) have been running a dance school in Nebraska, and both go to New York, also hoping to hit it big. The only problem is when they audition for the show Eddie is in, producer Buddy Bartell (Lane) only wants to hire Pat to perform with Eddie.

Trivia:
-Remake of The Broadway Melody (1929)
-Joan Blondell’s first film with Metro-Goldwyn-Mayer.
-Released in Great Britain under the name “Choose Your Partner.”
-The song “Maybe It’s the Moon” by Bob Wright and Chet Forrest was written for the film but not performed.
-Costumes by Dolly Tree
-Produced by Jack Cummings 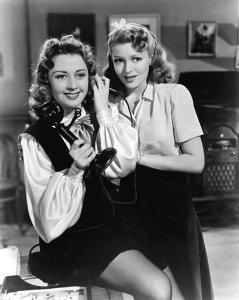 My review:
Two Girls on Broadway (1940) is a textbook example of an early 1940s Metro-Goldwyn-Mayer musical or comedy. It’s as light and luxurious as a chiffon scarf with lots of humor mixed in and peppered with drama.

The film is more of a comedy than a musical, but it includes enough dancing scenes and a few songs to merit being called a musical.

This film comes early in Lana Turner’s career and MGM is working hard to build her as the newest glamour girl with the tagline reading: “The Girl They’re All Talking About! Lovely Lana, America’s Blonde Bonfire, in her hottest, most daring role!” The plot takes a backseat to the promotion of Lana Turner’s beauty and breathy innocence.

While both actresses are wonderful, Joan Blondell got a raw deal in this film. She had left Warner Brothers, where she had been a top star for years and her career was on the decline. With her first film at MGM, it’s not easy for any actress to have to play second fiddle to Lana Turner.

Underrated tap dancer George Murphy also stars in this film. He shows his light-footed dancing skills particularly in the number “My Wonderful One Let’s Dance.”

This is a simple movie that makes me happy. It only runs at 74 minutes, making it as quick to watch as it is enjoyable. 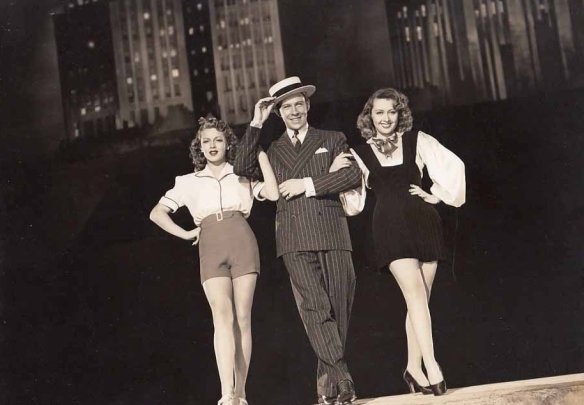