Plot:
Wealthy oil heir Scott Hayward (Presley) wants to be sure women love him for him and not his money. He switches places with Tom Wilson (Hutchins) and the two head to a luxury hotel in Miami. Tom acts like Scott and Scott acts as the hotel ski instructor. Scott falls for Dianne Carter (Fabares), who only has eyes for rich boat racer James J. Jamison III (Bixby).

Trivia:
-Ray Walker dubbed the singing voice of Will Hutchins
-Working title was “Too Big for Texas”
-Filming was delayed for 11 days because Elvis fell and had a concussion, according to The Gospel According to Elvis by Kevin Crouch and Tanja Crouch
-“Big Boss Man” and “Guitar Man” were featured on the soundtrack but not in the film.
-Filmed in Techniscope 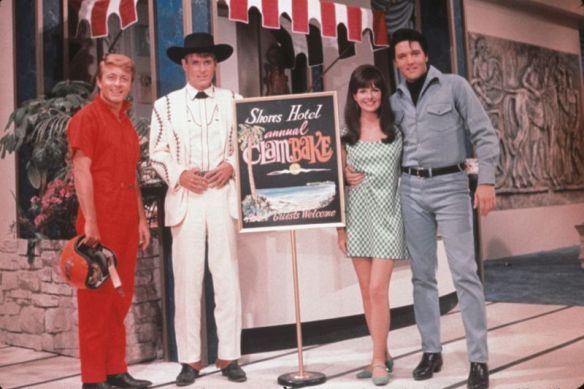 My review:
Like most of Elvis films, “Clambake” isn’t a strong film, but it’s fabulously entertaining.

It starts no differently than any other Elvis film: with Elvis driving down the road in a convertible car. Whether he’s rich or poor, he is always driving in some sort of convertible at the beginning of perhaps 70 percent of his films. It turns out he’s a rich guy in this film and he’s fed up with living life the way his dad wants him to. He also isn’t sure if a girl would want him for his personality, or for his money. So we have a take on “The Prine and the Pauper” when Elvis switches places with Will Hutchins. They both head to the same resort where Elvis will work and Will plays.

What makes this film so entertaining is the cast that the two guys meet at the hotel resort: Bill Bixby, Shelley Fabares AND Gary Merrill. Bixby is a rich playboy who all the girls flock around, Fabares is a gold digger and Merrill is the sage boat builder who takes Elvis under his wing and helps him build a race boat.

Bill Bixby is charming and really the person who I was cheering for in this film. Shelley Fabares is lovely with fantastic, mod clothing but I’m disappointed that she doesn’t get to sing. But the real surprise was seeing Gary Merrill pop up in this. Gary Merrill in an Elvis movie?!

He even is semi in a song and dance number as Elvis and a bunch of girls paint “goop,” experimental boat sealant so the boat won’t break apart during the race.

This movie isn’t an Academy Award-nominated film, but “Clambake” is colorful and fun. If you want a lighthearted, clear your mind hour and 39 minutes, this isn’t a bad way to spend it.

Note: There are on actual clambakes held during this film.