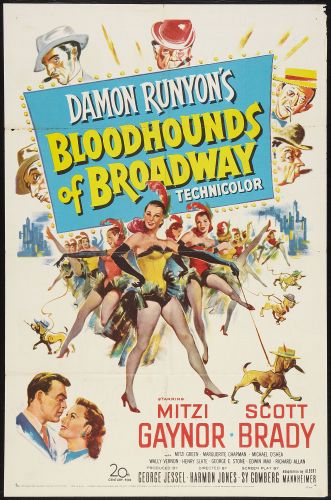 Plot:
New York bookie Robert “Numbers” Foster (Brady) is in danger of being subpoenaed. He and one of his men, Harry “Poorly” Sammis (Vernon), high tail it out of New York to Florida while Numbers’s girlfriend and singer of his club, Yvonne (Chapman), testifies that Numbers is only a gambler. On their way back to New York, Numbers and Poorly take a wrong turn in Georgia in the country and run out of gas. They come across Emily Ann Stackerlee (Gaynor), who is burying her grandpappy. The two men take pity on the now orphaned girl and bring her back to New York. Emily Ann ends up being older than they expected, so they try to give her a part in their nightclub act. However, Yvonne is jealous and holds the testimony over Numbers’s head.

Trivia:
– Victor Mature and Jean Peters were originally set to star with Mitzi Gaynor, according to a 1951 Los Angeles Examiner article. Their roles were filled by Scott Brady and Marguerite Chapman. Martha Raye and Zero Mostel were also announced by the Hollywood Reporter as acting in the film, but their roles were played by Mitzi Green and Wally Vernon.
– This film is based on the works of Damon Runyon. In 1952, Twentieth Century-Fox was sued by Cy Feuer and Ernest H. Martin, the producers of the Broadway musical Guys and Dolls, which is also based on the works of Runyon. Feuer and Martin said the film used “Guy and Dolls” in a misleading advertising campaign.
– Mitzi Green’s last film
– Charles Bronson in an uncredited role
– Remade in 1989 under the same title starring Matt Dillon and Madonna
– Produced by George Jessel
– Costumes by Travilla

My review:
I adore Mitzi Gaynor, but some of her early 20th Century Fox films can be hard to come across. I recently joined DVD Netflix and was excited to see “Bloodhounds of Broadway” (1952) was one of the movies you could rent. I knew “Bloodhounds” was on DVD for a few years, but never wanted to take the gamble to buy it and not like it.

I wasn’t sure what to expect from the film’s description involving bookies and a naive girl. This plot sounded too similar to “Guys and Dolls,” a story and film I don’t particularly care for. But I was pleasantly surprised by how charming and fun “Bloodhounds of Broadway” was, and other than gambling, the two stories aren’t similar.

Going into the film and looking at the cast list, I only knew of Mitzi Gaynor, Michael O’Shea (who was low on billing) and vaguely of Marguerite Chapman. I wasn’t familiar with leading man Scott Brady, who was extremely handsome, and surprised that he was the brother of bad boy actor, Lawrence Tierney. For the first time being aware of Brady, I thought he was swoon-worthy in his role and a decent actor. In the DVD’s featurette, “Mitzi Gaynor: Impressions of the Fox Years” was complimentary and said Brady had a rare mix of looks and acting chops.

Scott Brady and Marguerite Chapman in “Bloodhounds of Broadway”

Mitzi Gaynor is her usual energetic self and sells a song like no other. Her character is sweet and Gaynor has to put on a southern drawl. As a southerner usually this bugs me because it’s generally done badly, but Gaynor’s accent didn’t bother me. The only time I wasn’t a fan is when she starts singing “80 Miles Outside of Atlanta” in a twangy fashion. I started off thinking “Wow this is terrible,” but the number then turns more sultry and I thought it was great by the end.

The “Bloodhounds” part of the title is because Gaynor’s character literally has two bloodhounds, Nip and Tuck, who come to New York with her from Georgia. Since I love hounds, I of course loved this. Mitzi Green is entertaining in her last film role. Her character was a mix of Eve Arden sass with Joan Davis humor. Marguerite Chapman doesn’t have much screentime, but her character is easy to dislike.

One standout actor to me who intrigued me was Richard Allan, who played Curtaintime Charlie, a tap dancer (or hoofer) in Numbers’ nightclub. I was struck by how handsome Allan was and surprised I had never heard of this dancer. He doesn’t have much screentime but performs a cute version of “I’ve Got a Feelin’ You’re Foolin'” with Green and Gaynor. After that number, we don’t see much of him. I have a feeling he was supposed to be groomed as a new screen dancer, but it looks like he never got the same chance as others, including his idol Fred Astaire. Allan was a decent dancer and very handsome, so I wish he had a little more screentime.

Charles Bronson on the left

Also, I was a little startled to see Charles Bronson show up as one of the bookies.

All in all, “Bloodhounds of Broadway” is a really fun and glittering film. The storyline is slightly convoluted, but the Technicolor cinematography, Travilla costumes, attractive leads and songs distract you from that.