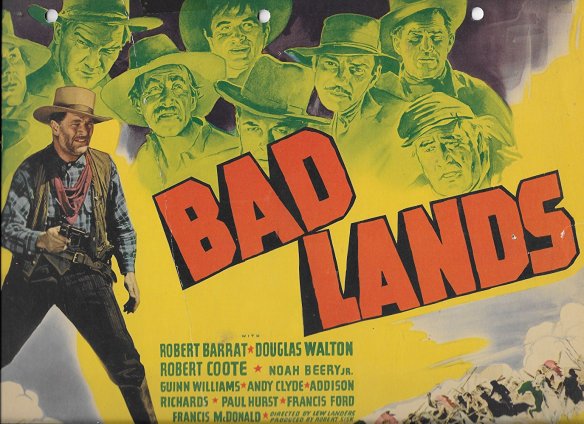 Plot:
Set in Arizona in 1875, a sheriff and his posse are traveling through the desert trying to find a killer. The group is short on water and Apaches are a threat to the group.

My review: Searching for the “1939 feature”:
At first glance, “Bad Lands” (1939) is a run of the mill low-budget western. But taking a deeper look, it’s a gritty and grim story with some history behind it.

The plot of “Bad Lands” (1939) isn’t a new one, but the location is. The story was first told in the novel “Patrol” by Philip MacDonald, where British soldiers get lost in the Mesopotamian desert during World War I and die one by one. This story was told twice on-screen: “Lost Patrol” (1929) and “The Lost Patrol” (1934), and then the location and setting changed.

In 1939, Mesopotamia was changed to the Arizona desert and the time to 1875 while a sheriff and his posse are looking for a killer, and Apache Native Americans are a threat to the group.

This story was later adapted to a World War II story. “Bataan” (1943) set the group of men in 1942 in the Philippines with the Japanese advancing on the unit.

My only complaint with the film is that there were so many characters to keep up with — 10 to be exact — that I got a little bit confused about who was who and had to refer to the cast list.

One interesting note: I have been keeping track of how many films actors and character actors were in during the year 1939. So far Addison Richards, who is in this film, wins with 23 credits released in 1939.