Plot:
Sailor Johnny Webster (Bracken) is home on leave and believes his father William Webster (Moore), a former silent film star, is the head of Paramount Studios. In reality, his father is just a security guard at the studio. His father made a promise to put on a star-studded performance for the Naval base. The last 40 minutes of the film is the Naval skit.

Trivia:
– Walter Abel’s character of B.G. Desoto was modeled after Paramount studio head Buddy DeSylva. Edward Fielding’s character of Y. Frank Freemont was based on vice-president Y. Frank Freeman.
– Victor Moore’s silent film character was based on Broncho Billy Anderson, who sued because of the similarity and saying the character’s career was “broken down.”
– Some of the skits were written by Arthur Ross and Fred Saidy for the unproduced film, “Rally Round the Girls.”
– Veronica Lake was dubbed by Martha Mears. 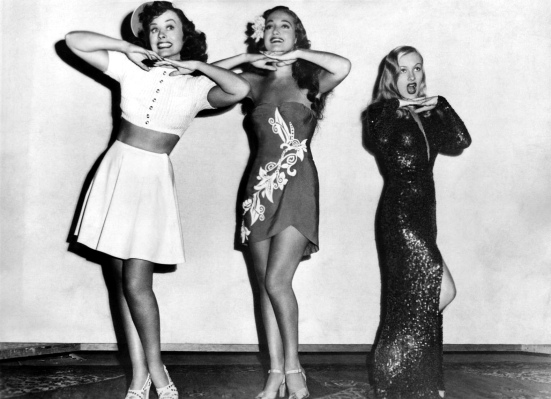 Paulette Goddard, Dorothy Lamour, Veronica Lake in costume for “A Sweater, a Sarong and a Peek-a-Boo Bang”

Highlights:
– All of the musical performances
– The cameos 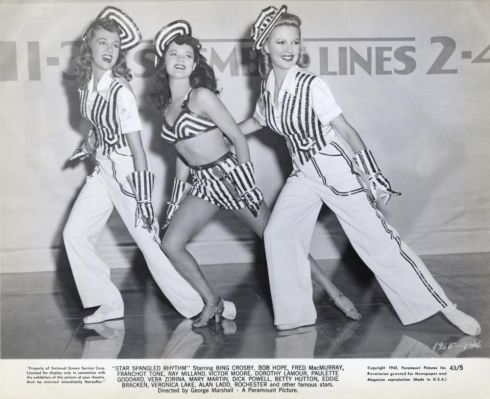 Betty Ann Rhodes, Dona Drake and Marjorie Reynolds in costume for “On the Swing Shift”

My review:
During World War II, several musicals focused on patriotism and entertaining servicemen. Sometimes these musicals were filmed like a USO show for servicemen, and they made the actors back home feel like they were doing their part. This kind of musical would have a thin plot that was strung together by star-studded musical performances or skits. Nearly every star on a studio lot would be cast, appearing for a few minutes of screen time. 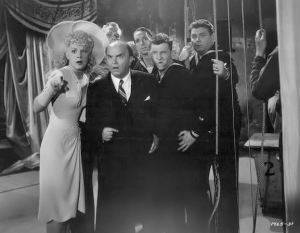 “Star Spangled Rhythm” is one of those films. Betty Hutton and Victor Moore run around Paramount’s lot, trying to keep up the farce of Moore being a studio executive for Eddie Bracken and his friends. As they run around the lot, they run onto sound stages where actors are singing, watch a daily with Preston Sturgis of Dick Powell and Mary Martin singing, and then the last 40 minutes is filled with skits and musicals as the Paramount stars putting on a show for the Naval base.

But as I said, this format isn’t unique. “Star Spangled Rhythm” is just Paramount’s answer to this story equation. MGM’s was “Two Girls and a Sailor” and “Thousands Cheer“; Fox’s was “Four Jills in a Jeep“; Warner Bros had “Thank Your Lucky Stars” and “Hollywood Canteen.”

And while watching musical performances that aren’t connected to the plot may not seem like the contemporary idea of a musical, these films are all enjoyable. It’s fun to play “spot which actor will come on screen next” and watch the happy numbers.

“Star Spangled Rhythm” is fun because we have the added bonus of some of Paramount’s directors, like Preston Sturgis and Cecil B. DeMille. Betty Hutton, Victor Moore and Eddie Bracken provide the comedy and all of the Paramount studio players, playing themselves, provide cheerful song and dance numbers.

This movie is so much fun. It’s bright, exuberant and hopeful, what the United States needed during the dark days of World War II.