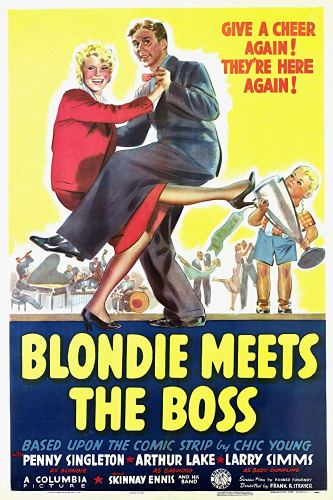 Plot:
Blondie (Singleton) and Dagwood (Lake) are ready to go on vacation with their Baby Dumpling (Simms). The day they leave, Dagwood’s boss Mr. Dithers (Hale) said he has to go out of town on urgent business and needs Dagwood to stay and work and cancel his vacation. Outrage, Dagwood resigns. Blondie begs Mr. Dithers for Dagwood’s job. Dithers strikes a deal with Blondie: she works in Dagwood’s place while he is on the business trip.

Other trivia:
• First film of Robert Sterling who was in an uncredited role.
• Blondie Steps Out was the working title

My review: Searching for the “1939 feature”:
I grew up reading the Blondie comic strips and only vaguely recall seeing the films as a small child. Watching “Blondie Meets the Boss” was the first introduction I’ve had to these films in years and getting through this hour and 12-minute serial film was a struggle.

A March 8, 1939, Variety review said it was “amusing only in spots” which is approximately how I felt about “Blondie Meets the Boss.”

However, as far as the film’s importance goes, “Blondie Meets the Boss” was made because of the extreme popularity of the first Blondie film, “Blondie” (1938). So 1939 brought the second film in the series and thus began a series that lasted on screen from 1938 until 1950 with 28 films total. 28! That’s not to mention the radio show that ran from 1939 to 1950, and a 1957 TV show. The comic strip still is published today.

As far as the film, Penny Singleton plays the title character of Blondie, Arthur Lake plays Dagwood and Larry Simms is Baby Dumpling. Singleton is cute and funny but I found Lake’s Dagwood character to be insufferable. And somehow Dagwood had more screentime than Blondie (I haven’t seen any of the other films yet, so I don’t know if that is just this film or a common theme). Larry Simms is very cute as Baby Dumpling who throws in joking jabs at the adults.

While parts of this film were painful to watch (the type of comedy where they run in circles looking for each other in the house, and if someone would just stop they would find the other person), there was one (just one) part that made me laugh out loud. Blondie believes Dagwood is cheating and the camera goes close on Singleton’s face as footage of explosions, rockets, fires, and other catastrophic scenes play across her face and depicting her anger. I laughed out loud at that. But that really was the only time that I did, which fits the “amusing only in spots” description.

Of course, I went into the “Blondie” film knowing this wasn’t “Mr. Smith Goes to Washington.” It’s a film a little over an hour, most likely meant to be shown in a double feature. While the storytelling isn’t amazing and the humor isn’t all that funny, it’s interesting to see how a comic strip can evolve into huge popularity across mediums.