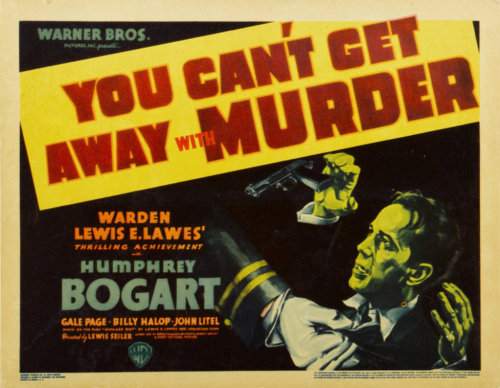 Plot:
Teen Johnnie Stone (Halop) is raised by his sister Madge (Page). Madge worries about Johnnie who has fallen in with tough characters, like Frank Wilson (Bogart). Madge hopes her upcoming marriage to her boyfriend Fred (Burke) will help Johnnie when the three of them move away for Fred’s job. On the eve of announcing their wedding plans, Johnnie goes on “a job” with Frank, and someone is killed with a gun Johnnie stole from Fred. Fred is accused of murder and sent to jail in Sing Sing, along with Frank and Johnnie who are booked for another crime. Johnnie has to pick between saving Fred’s life or putting his own life in danger by confessing.

Other trivia:
• Adaptation of Lewis E. Lawes’s play “Chalked Out.” Lawes was a warden of Sing Sing. 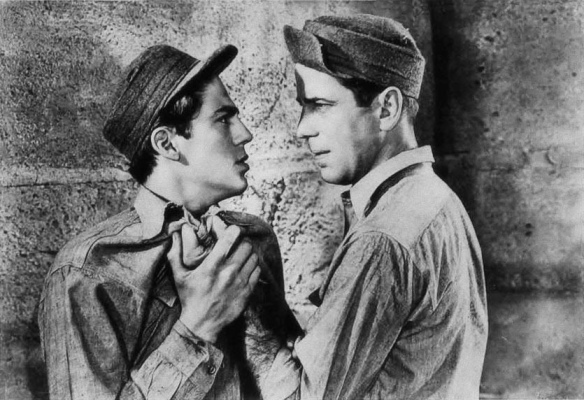 My review: Searching for the “1939 feature”:
Today, we know Humphrey Bogart as a big star. And while he became a bonafide star in the 1940s, he was still climbing the ladder in 1939.

As I’ve written before, 1939 helped his career, though his roles were varied, from being a tough guy in this film and “The Roaring Twenties,” to a stablemaster with an Irish accent in “Dark Victory.” Though his roles like this one were not large films, they also solidified his persona of “tough guy.”

In “You Can’t Get Away with Murder,” Bogart is another one of these tough guys. And while his name is the one people today recognize best, Billy Halop is really the star of this film, and the film follows his story: A teen who gets in with the wrong crowd, commits a crime and puts the blame on his sister’s boyfriend. Her sister’s boyfriend is going to go to the chair for the crime, and it all hinges on if Halop will do the right thing and take responsibility, or if he will ruin his sister’s life and end her boyfriend’s.

Billy Halop usually was one of the Dead End Kid in other films. No other Dead End Kids are in this film with Halop, but he plays the same confused tough kid who is usually close to tears.

Gale Page plays his sister is wonderful as always. I feel like Page is an underrated actress. While Page was in six films in 1939, she was still relatively new to Hollywood, with her first film in 1938. But she was well-known for her role in “Four Daughters” (1938).

For me, the real standout character is Henry Travers. Travers is “Pop,” the elderly prison mate who runs the prison library and tries to take Halop under his wing. Though Travers is a criminal (we never are told why he is in jail), he is a kind and sympathetic character who tries to be a voice of reason.

“You Can’t Get Away with Murder” (1939) is a decent film, but frankly not very different from other crime films released by Warner Bros. at this time. It’s easy to confuse with movies like “Invisible Stripes” or “They Made Me a Criminal,” which were also released in 1939.

IMDB classifies this as a “film-noir,” and while it’s too early for the noir movement, it does have some elements, such as letting someone else die for the crime you were involved with.

“You Can’t Get Away with Murder” is exciting in some areas and frustrating in others, due to the topic. However, it’s entertaining, but not a lasting memory in the year 1939.