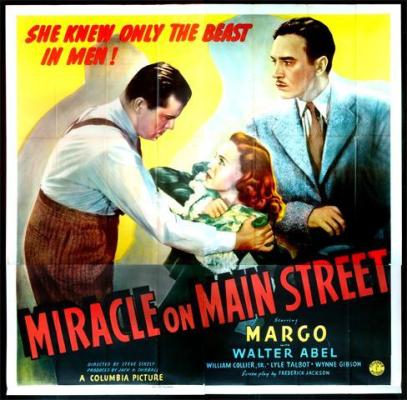 Plot:
On Christmas Eve in the Spanish quarter of Los Angeles, Maria (Margo) is performing as a hoochie coochie in her husband Dick’s (Talbot) show. When one of the attendees is a police officer, the couple run from the police, but Dick says they should separate so they aren’t caught. Maria hides in a church where she finds an abandoned baby. While her husband remains absent for a year, Maria’s life is changed for the better by the baby and a new man she meets, Jim (Abel). 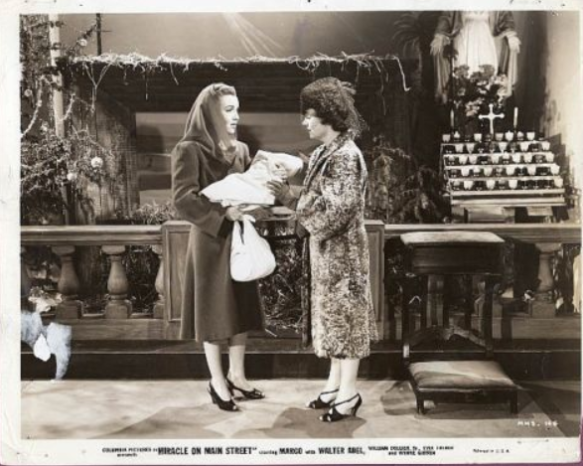 Other trivia:
• The film was made by Grand National but released as Columbia after the studio liquidated.
• A Spanish version was released the same year starring Margo, “El milagro de la calle mayor,” which was released by Twentieth Century Fox
• Actress Jean Brooks is billed as Jeanne Kelly in this film.

My review: Searching for the “1939 feature”:
In the realm of both Christmas and 1939 films, “Miracle on Main Street” is a forgotten little film.

Made in a “poverty row” studio and running at just 78 minutes, “Miracle on Main Street” may not be the best movie of the year but I found it sweet and entertaining.

Actress Margo (who later married Eddie Albert) plays the lead and turns over a new leaf in life when she finds an abandoned baby. She gets a job as a seamstress, later graduating to a designer, and meets a man who is worlds better than her no-good husband played by Lyle Talbot.

Now I love Lyle Talbot, but boy is he good at playing a louse! It’s interesting that Walter Abel is our leading man and hero here, as you don’t generally see him as “a leading man” in A-budget pictures.

While I don’t think this is the strongest movie, I don’t fully agree with that assessment. However, I do think the set up of the plot is a little odd.

The film begins with Walter Abel and Jean Brooks getting engaged on Christmas Eve. Then we transition to Margo and Talbot. Starting with Abel and Brooks makes us think they were the couple we are following, when their introduction is to really set us up for the plot later on. Both characters disappear until mid-way through the film. I’m curious why they were introduced at all at the start. It would have made more sense for Abel just to enter mid-way.

Despite this perhaps unnecessary way of storytelling, I enjoyed this movie.

This movie is also interesting because while it was in production, a Spanish language version was made at the same time, also starring Margo, entitled “El milagro de la calle mayor.” The English and Spanish language films are the only two films that Margo made in 1939.

Also of note: “Miracle on Main Street” was made at Grand National Studio. But the studio liquidated before the film could be released. The English version was released under Columbia Pictures and the Spanish language version under 20th Century Fox.

It can be hard to find, and if you’re like me, you will do anything to see a holiday film that you haven’t seen before. I bought someone’s DVR copy off eBay in order to see it. I think it was a worthy purpose.

It’s a sweet film where both the holiday and a baby transform someone’s life.