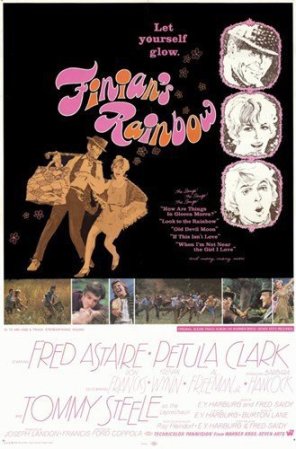 Plot:
Father and daughter Irish immigrants Finian (Astaire) and Sharon (Clark) McLonergan travel to the American southern town of Rainbow Valley. Finian wants to bury his gold at Fort Knox thinking that it will grow more gold, but he is followed by a Leprechaun Og (Steele) who wants to retrieve the gold before he is turned human.

When a bigoted senator (Wynn) realizes gold is buried on the property, he tries to get the land from Finian.

Trivia:
• Fred Astaire’s first film project since 1962 when he acted in The Notorious Landlady. This was Astaire’s last musical.
• Based on the 1947 stage musical, “Finian’s Rainbow.” David Wayne played the role of Og on stage and received a Tony Award.
• Hollywood had been planning to make this film since 1948, but all the studios wanted to change the plot to take out the racist plot, but writers E.Y. Harburg, Burton Lane and Fred Saidy held out until the 1960s.
• The same forest used in “Camelot” was used in “Finian’s Rainbow,” according to the book Hermes Pan: The Man Who Danced with Fred Astaire by John Franceschina
• Jack Warner only wanted to do the film if he could have Fred Astaire as Finian, according to Franceschina’s book.
• Francis Ford Coppola fired Hermes Pan from the film as choreographer, feeling he was too old fashioned.
• The film was shot in 35mm, but expanded to 70mm for the release, cropping the top and bottom of the film which cropped Fred Astaire’s feet in dancing, according to Franceschina’s book.
• First film of Barbara Hancock 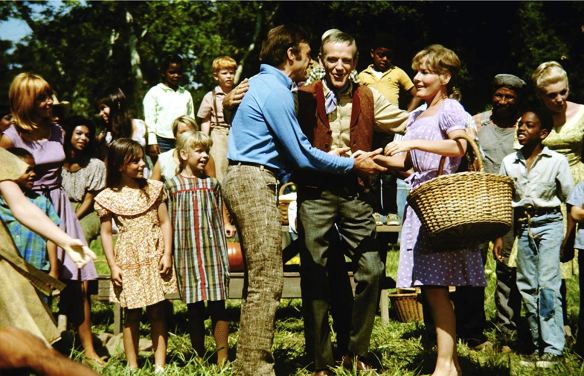 Notable Songs:
None that I feel worth mentioning

Going into this film, I didn’t know the plot, that it was a Broadway show or anything else about the movie other than that it starred Petula Clark and Fred Astaire. I did expect it to have the same look and feel of other late-1960s and 1970s musicals – almost a country feel and like it was shot at high noon outside. There it did not disappoint.

For the leads Fred Astaire and Petula Clark, I felt bad that they were part of a terrible film, particularly Astaire. This almost felt like a weird 1968 “Brigadoon” … but not.

Perhaps the movie wasn’t good because the storyline is lousy.

Though this was a renowned Broadway show that won Tony Awards and ran for 725 performances, it’s an odd story.

Finian travels from Ireland to the American south, because he thinks the pot of gold he has will grow in southern soil, and a leprechaun follows him because he needs the gold for his powers. This is bizarre enough.

Since they are in the south, Finian and his daughter Sharon befriend everyone of all races. The story focuses on racial tensions and prejudices … but in the most ridiculous way.

A bigoted senator, played by Keenan Wynn, comes kick Finian off the land he just purchased, knowing there is gold on the property. To get the land, the Senator tries to charge Finian and Sharon with a crime for befriending African Americans. Furious at his prejudices, Sharon says “I wish you were black!” … and Keenan Wynn turns black. And his character is in blackface for much of the film. While in blackface, Wynn is treated poorly by friends, chased by his bloodhound, but then eventually embraces it (once Og the Leprechaun wishes that the Senator would be tolerant). Now friends with African Americans, Wynn becomes the fourth singer with a black singing group. This is really bizarre and ridiculous.

I understand what the story is trying to do. And in 1947 on stage, this plotline was groundbreaking. Recognizing that prejudice was wrong in 1947 wasn’t often done. That’s why it took so long for this play to come to screen – because the studios wanted to edit out this plot line.

I understand that Keenan Wynn’s character is supposed to realize his prejudices are wrong after turning black. But having an actor in blackface learning that racism is bad is ridiculous. I mean at the point that Wynn is wished to be tolerant, he’s singing “Them Golden Slippers” like a minstrel performer.

Keenan Wynn after he was turned black by a wish with the Gospel Trio (Avon Long, Jester Hairston and Roy Glenn) (Screenshot by Comet Over Hollywood)

On the other hand, perhaps this movie wasn’t good because of the production values and director.

Today, Francis Ford Coppola is a seasoned and well-respected Hollywood director. But in 1968, he was a recent film graduate who had never directed a musical or worked for a major film studio or with a large budget film.

While “Finian’s Rainbow” was a large budget film, Warner Bros-Seven Artists still wanted to cut corners and gave Coppola a $3 million budget. Coppola wanted to film in Kentucky but was denied by studio brass.

When Warner Bros. bought the film rights to “Finian’s Rainbow,” Jack Warner wanted Fred Astaire for the role of Finian, and Astaire’s long-time choreographer and collaborator Hermes Pan was signed on.

But Coppola wasn’t keen on either.

It is said that Hermes Pan rarely said an unkind word about others, but was unhappy with his treatment on this film and Coppola, according to the book Hermes Pan: The Man Who Danced with Fred Astaire by John Franceschina.

“He may have been great on the Godfather, but he knew very little about dancing and musicals,” Pan said. “He would interfere with my work and even Fred’s. Fred is such a gentleman he wanted to try to please, but Coppola and Joe Landon, the producer, actually told me, ‘Try not to make Astaire like Astaire.'”

Pan said they wanted Astaire to be Finian and not Astaire. “He’s Astaire and no one is going to forget that,” Pan said.

Pan was replaced by as choreographer. In turn, Coppola felt that Pan’s choreography was “abysmal,” according to Phillips’ book, though Coppola also admitted he wasn’t a dance director.

Even without Pan, Astaire had his same charm and personality as he did in his other films. However, Astaire was disappointed that not all of his dancing was displayed.

The film was shot in 35mm, but expanded to 70mm for the release, cropping the top and bottom of the film. This cropped out Fred Astaire’s feet and you couldn’t see all of his dancing, which Astaire was upset about. Coppola was blamed for this, but ultimately it was a Warners-Seven decision.

Petula Clark in one of her early roles as an adult actor (she also acted as a child) does well with what she is given also. Her leading man Don Francks (later starred on “Mister Rogers) is also appealing enough with an affable attitude and nice singing voice.

The film also stars Tommy Steele as the leprechaun Og, a role originated on stage by David Wayne. Steele is fine, but the character is annoying. There is also a newcomer, Barbara Hancock, who plays Silent Susan who is can’t speak and communicates by dancing. Her role is relatively small, but I suspect it was larger on stage.

Even Astaire, Clark and Francks couldn’t save this film.

One thing especially unforgivable about “Finian’s Rainbow” is that all the songs are forgettable.

Running at two hours and 20 minutes, “Finian’s Rainbow” seems to last an eternity. An hour in, I thought I must be finished, but no such luck.

The day after I watched this movie, I woke up nauseous. I can’t be sure that this illness is connected to the film, but I won’t rule it out either.

“Finian’s Rainbow” is just another late-1960s musical trying to follow the success of “Sound of Music” (1965) and failing miserably at the box office.

I would be curious to see how the original Broadway play compares. The prejudice themes were groundbreaking for a 1947 play. Studios wanted to make this film earlier but wanted to edit out this part. I think even if this had been made earlier in the golden age of musicals with Arthur Freed producing and bathed in MGM Technicolor, it still wouldn’t be very good.

“Finian’s Rainbow” tries to be whimsical but is just a mess. I just feel bad that Fred Astaire’s last musical film was this.