Plot:
A traveling salesman (Howland) convinces Blondie (Singleton) that Baby Dumpling is a genius after he takes a test. Blondie and Dagwood (Lake) immediately enroll him in school. Meanwhile, at the office, Dagwood flubs a deal when he changes the architecture of an apartment building his company is designing. 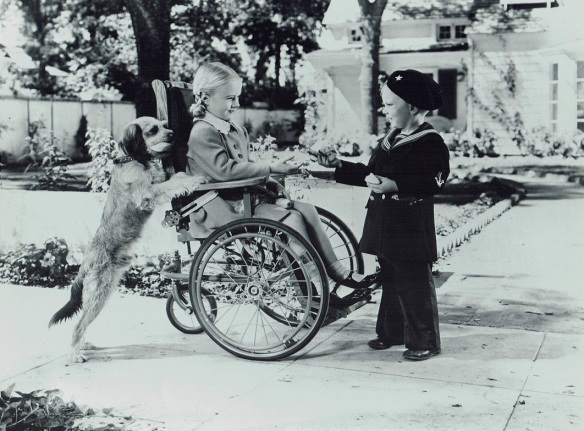 My review: Searching for the “1939 feature”:
“Blondie Brings Up Baby” is the last of three Blondie films released in 1939. But these three were just a drop in the bucket of the 28 films made based on the Blondie comic strips.

In “Blondie Brings Up Baby,” the plot seems that it would revolve around Baby Dumpling being declared a genius, but the plot shifts to losing Daisy while Baby Dumpling is at school and the genius plot is lost. A smattering also focuses on Dagwood losing his job.

Dagwood’s boss Mr. Ditfor hers always gets mad at Dagwood because he’s not very smart. But let’s face it, Mr. Dithers should take responsibility for hiring such a knucklehead.

The plot and comedy are no different than the other films in the series, however, this film has a special appearance from an actor – future star Peggy Ann Garner.

Just in her third film, Garner plays a little girl who is wheelchairbound after an illness. She is given Daisy the Dog and then she and Baby Dumpling play together. Rather than being goofy, Garner’s scenes were rather sweet because then she walks again.

I think “Blondie Brings Up Baby” may be a little better than others because it’s more focused on the children rather than the adults. Outside of the storyline, Peggy Ann Garner is the bright spot of this short film, even though the film is short.