Plot:
Michael Gore-Brown (Wilding) is a broke aristocrat who inherits the fancy lady’s dress shop in the fashionable neighborhood, Mayfair. Michael is planning to sell the shop until he meets and falls in love with the shop’s owner and designer Eileen (Neagle). He tries to run the shop on his own but realizes he needs Eileen to compete with another sophisticated shop owner, D’Arcy Davenport (Graves).

Trivia:
• The only color film Anna Neagle and Michael Wilding filmed together. The two were in six films together. The pair were the biggest box office draw in Great Britain in 1949.
• Follow-up to “Spring in Park Lane” (1948)
• A fashion show number includes costumes by English designers such as Bianca Mosca, Mattli, Hardy Amies, Charles Creed, Digby Morton, Molyneux, Peter Russell and Victor Stiebel. 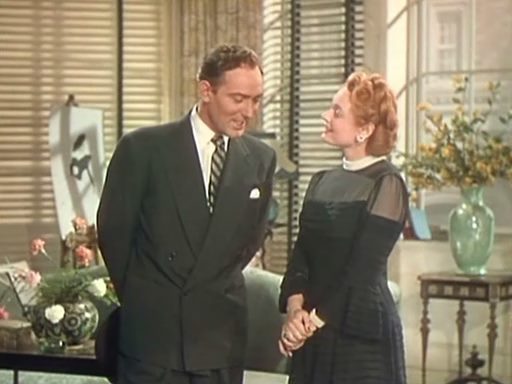 Highlights:
• The Technicolor
• Fashion show to describe how the shop and fashion works, as all of the models pose in front of Vogue and Harper’s Bizarre.
• Michael Wilding says of Neagle’s character, “She reminds me a bit of Anna Neagle”
• Dream sequence with Anna Neagle dancing as she has a dress made for her.

My review:
When we think of screen teams, one that goes under the radar is Anna Neagle and Michael Wilding, who were the top box office draw in 1949 in Great Britain. “Maytime in Mayfair” was the fourth teaming of Neagle and Wilding and a bit of a sequel to “Spring in Park Lane” (1948).

“Maytime in Mayfair” has a light plot – a broke Michael Wilding inherits a posh dress shop with every intention of selling it until he meets the store’s designer, played by Anna Neagle – someone he feels he could “fall in love with at the drop of a hat.” Neagle isn’t sure about Wilding at first but then the two fall in love. But things are complicated when Neagle things that Wilding leaks her upcoming spring fashion line when it’s really their competitor. The story is rather similar to “Roberta” (1935).

The uncomplicated story is told against gorgeous Technicolor cinematography. We have the chance to see Anna Neagle’s vibrant red hair and costumes in light blues, pink hat flowers and yellow suits. Britain’s top fashion designers are showcased in a dream-like fashion show as Neagle explains to Wilding how introducing new fashion lines work.

As lovely as this movie is, it’s not a true musical. However, it’s a Musical Monday write-up because all reviews and 1949 articles reference “Maytime in Mayfair” as a musical. Similar to another Anna Neagle film, Irene (1940), the film has music in the background, the leads sing a few songs briefly, and Anna Neagle has a solo dance number in dream sequences. Neagle and Wilding – dubbed the British Fred and Ginger – also have two dance numbers together. One a brief dance in their apartment, and another in a slow motion daydream. While Neagle originally studied to be a dancer, Wilding is no Astaire but is adequate enough.

While fashion shows and fashion in films is nothing new to American audiences, this feature on fashion was significant for Great Britain and it’s audiences. In addition to food and gas, clothing (including high fashion) was also rationed during World War II and for the years that followed, according to a TCM article by Jill Blake. Not long before “Maytime in Mayfair” was released, the clothing ration was lifted, making a story on haute couture more timely and signifying that post-war England perhaps would be trending back to more normal life.

“Maytime in Mayfair” may not be your run-of-the-mill song-filled musical, but it’s a charming story and beautiful to look at.