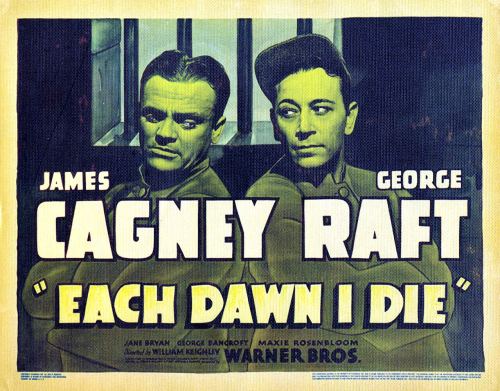 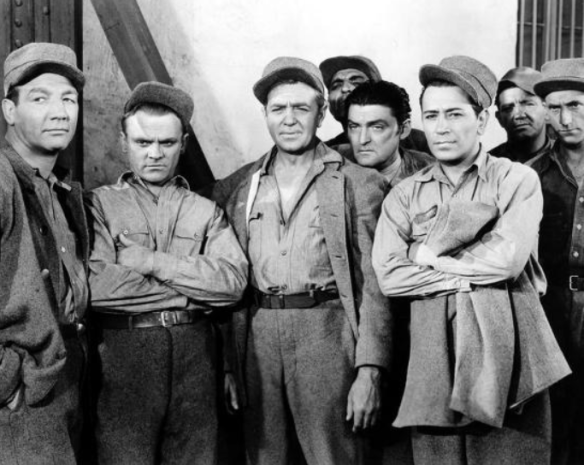 My review: Searching for the “1939 feature”:
Actors James Cagney and George Raft were no strangers to performing in films as tough guys who end up in prison.

In the year 1939, nearly every movie Raft starred in – he was in prison (“Each Dawn I Die” or “Invisible Stripes“) or plays a gambler or a taxi driver who was wronged.

In two of the three films Cagney starred in 1939, ends up on the wrong side of the law. In “The Roaring Twenties,” he’s a gangster and in “Oklahoma Kid,” he’s a gunslinger (yep, Cagney in a western).

But “Each Dawn I Die” is a bit different for Cagney. Instead of a mug, Cagney is an eager reporter trying to expose the corrupt local government. To put a stop to it, the leaders hire mugs to make it look like Cagney was drunk driving when he hits a vehicle, killing everyone in the car.

He goes to jail on a manslaughter charge with the DA personally making sure he doesn’t get out of jail to write more stories about him.

George Raft’s character is a prison mate that Cagney meets. Raft plans to break out of jail and promises to help Cagney on the outside.

“Each Dawn I Die” is your general Warner Bros. prison film but has elements that keep it interesting and sets it apart: a person who didn’t commit a crime finding himself in prison with no feasible way to get out; a prison murdering another prisoner who is also an informant, an ill prisoner dying due to mistreatment and prisoners ganging up on a guard and killing him.

The only disappointment I had in this film is that Jane Bryan has such little screentime. Bryan co-stars in a small and thankless role as James Cagney’s girlfriend.

“Each Dawn I Die” is fast-paced and stays interesting because of the supporting prison characters, as well as Cagney and Raft as the leads.