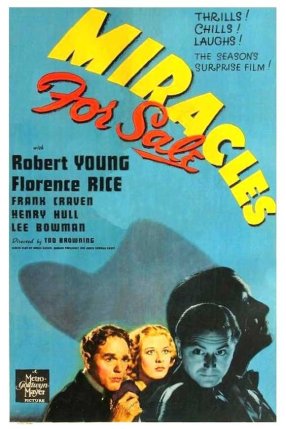 Plot:
Michael Morgan (Young) is a former magician who has created “Miracles for Sale,” a business of selling illusions and magic tricks. Morgan also works to expose fake spiritualists and psychics. Morgan gets caught up in a series of murders after demon expert Dr. Sabbatt (Worlock) is killed. As other murders follow, Morgan and the police are stumped by the mysterious and magical ways people are killed.

Other trivia:
• Tod Browning’s last directorial project. He retired after this film.
• Robert Young and Florence Rice were in six films together. “Miracles for Sale” was their last film together.
• Based on the book “Death from a Top Hat” by Clayton Rawson.
• Actor Henry Hull was one of the first actors to wear colored contact lenses on screen.
• Virginia Grey was originally announced as acting in “Miracles for Sale,” according to a May 8, 1939, news brief “Miracles for Sale Near Starting Line.”
• Henry Hull plays multiple roles in this film with the help of Jack Dawn’s makeup work, according to a June 30, 1939, news brief. 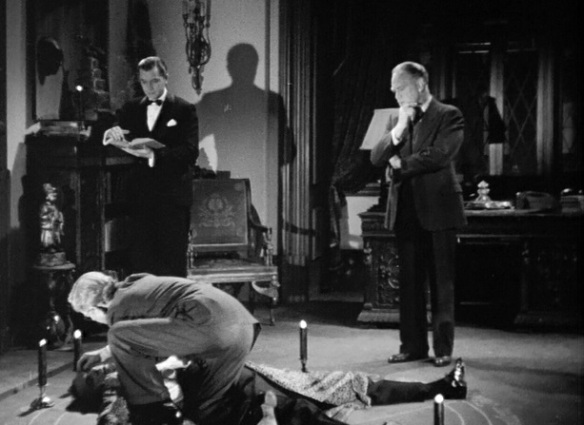 My review: Searching for the “1939 feature”:
When it comes to film screen teams, on seldom discussed is the pairing of Florence Rice and Robert Young. Often teamed in MGM lower budget films, Rice and Young were in six movies together, and “Miracles for Sale” was their last.

Set in New York City, “Miracles for Sale” is a mystery involving twists and turns because of the magicians involved. Young plays Michael Morgan, formerly the magician The Great Morgan, who creates illusions and sells them to other acts. He also dislikes and tries to expose phony spiritualists. When one of the spiritualist experts is killed, Morgan helps the police try to solve the mystery with his knowledge of magic tricks.

“Miracles for Sale” is a mysterious but comedic film with twists and turns as you try to figure out which magician committed the crime. Frank Craven plays Robert Young’s dad who helps out along the way and also makes wisecracks about New York City. Florence Rice is a young woman who’s life is in danger, and Young is trying to figure out why.

While “Miracles for Sale” marked the last time Young and Rice co-starred. It also marked the end of a director’s career: This was the last project for Tod Browning, who directed horror films like “Freaks” (1932) and “Dracula” (1931).

“Miracles for Sale” is an enjoyable, 70-minute film. While it didn’t do anything for the careers of those who worked on this project, it’s still fun and mysterious. It’s a good way to kick off the Halloween, fall season.