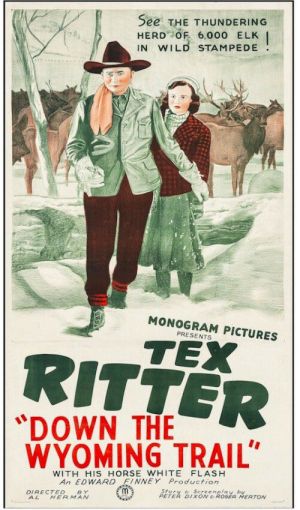 Plot:
On Christmas Eve, Tex Yancy (Ritter) is a stranger riding through town when he witnesses a stampede started by the Becker gang. He rescues Candy Parker (Brodel), who hires him to work on the Parker ranch. The town also decides Tex should play Santa, because the children won’t recognize him. While Tex is dressing as Santa, one of the Becker gang also dresses like Santa and goes to the Parker ranch to steal the payroll. When they shoot and kill one of the ranch hands, Tex is arrested for the murder and he has to clear his name. 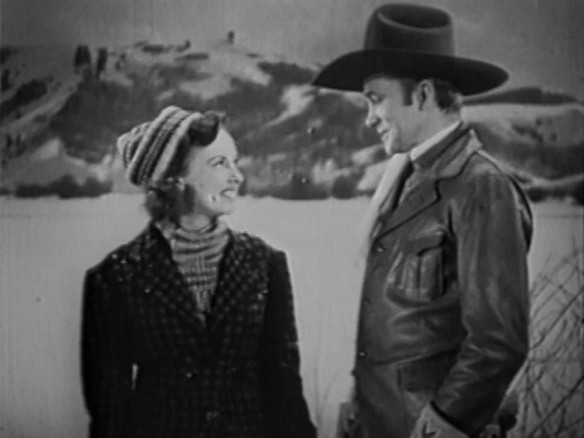 My review: Searching for the “1939 feature”:
Simple western movies have been a staple in Hollywood since the silent film era. And in 1939 this was no exception.

Singing Cowboy Tex Ritter stars in “Down the Wyoming Trail,” a 58-minute crime western. The storyline isn’t new and is cookie cutter format of other westerns made during this time:
– A stranger comes into town
– A band of bad guys cause trouble
– A pretty young woman (who may not have any family or parents) needs help
– The stranger gets blamed for something he didn’t do

But this story has something unique added – it takes place at Christmas.

Tex rolls into town on Christmas Eve. Since he can’t start his new job as a ranch hand until the 26th, he plays Santa at a party. But another Santa suit is worn by one of the bad guys while robbing the Parker ranch and killing a farm hand. The town believes Tex did it.

Tex Ritter was in more than 40 “singing cowboy” westerns from 1938 to 1945. And he has the opportunity to sing a few songs in “Down the Wyoming Trail.” The Northwesterners also sing a song in the film.

By 1939, Ritter had made a name for himself in Hollywood. Coming to the Los Angeles in 1936, he made his first film the same year.

Ritter is one of the few established stars in this film. His leading lady is played by Mary Brodel, and this was one of her few credited screen roles. This was also the first film role for child star Bobby Larson, who was in the “Five Little Pepper Series.

The main issue with “Down the Wyoming Trail” is that it was low budget and is also now in public domain, meaning that the picture the sound quality may not be the best.

While many of these quick westerns run together, this one stands apart because of the Christmas tie in. It was actually my first experience with a Tex Ritter film, and it was an entertaining one.