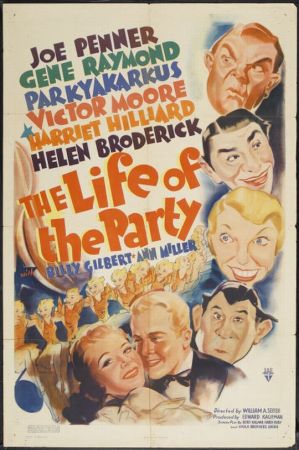 Plot:
Mitzi (Hilliard) aspires to be a singer and is traveling with her aunt Pauline (Broderick) to California for her big chance. The issue is that Mitzi’s mother (Shoemaker) wants her to give up her dream of singing. On the way, she meets Barry (Raymond) when she gets her shoe heel stuck on the train. Barry has to wait to get married until he is 30 so he doesn’t lose his inheritance, but he falls in love with Mitzi.

Trivia:
• Ann Miller’s film role that was credited and as a character, rather than a specialty act.
• Film seems to follow “New Faces of 1937,” which stars many of the film’s stars, including Ann Miller, Joe Penner and Harriet Hilliard
• Joe Penner’s character is named Joe Penner
• Third film of Harry Parke, who acted under the name Parkyakarkus
• Working title was “Three on a Latchkey”

My review:
There are some movies that would be perfectly okay if it wasn’t for a novelty comedian who pops in and does their bit for five to 10 minutes at a time.

The on its own is weak but tolerable: Boy and girl meet and fall in love, but boy has to wait to be married until after he’s 30 in order to inherit the family fortune. The girl’s mother wants her to marry into a wealthy family instead of pursuing her singing career.

But to add to a weak plot, not one but two novelty comedians that make “The Life of the Party” almost unbearable: Harry Parke, acting under the name Parkyakarkus and Joe Penner as himself.

Parkyakarkus’s character was a stereotype of a Greek who had a hard time with the English language; confusing words. Joe Penner brought his vaudeville character to the screen with his goofy and unintelligent nature and hyuck-hyuck laugh. Both are extremely irritating.

It’s odd because Joe Penner receives top billing in the film, but doesn’t appear until 35 minutes into the movie.

The stars of the film are Gene Raymond and Harriet Hilliard, better known today as Harriet Nelson of the “Ozzie and Harriet” TV series.

It’s fun to see Harriet Hilliard Nelson in these 1930s film roles before she changed her screen name to Harriet Nelson and went on to star in the successful radio and television series. She was already married to Ozzie Nelson by this point. Hilliard is pleasant and has a nice voice, but I don’t thinks he was a threat to her other musical contemporaries of Ginger Rogers, Ruby Keeler or Alice Faye.

For Gene Raymond, husband of Jeanette MacDonald, this low-budget level of comedic musical is on par of most of the films he made in the 1930s. And in this film, we even get to hear Gene Raymond sing! While he looks like he could be related to Nelson Eddy (cousins maybe?), Raymond doesn’t have the same pipes but doesn’t do a bad job.

Ann Miller is also cast in the film but don’t expect much screentime, who 14 at the time and still early in her film career. We see Miller briefly at the beginning, but she has a great solo dance during the “Yankee Doodle Band” finale number.

While the actual film was weak, I think my favorite part was Edward Stevenson’s costume design. Harriet Hilliard wears a sequined evening gown with a cape and a little cap on top. Just stunning.

A look at Edward Stevenson’s costumes

My sentiments about this film are apparently not too far off from the public in 1937, as it lost money for RKO.

It was an exhausting 77 minutes to watch, but if you are an Ann Miller fan, it may be an interesting look at her career.