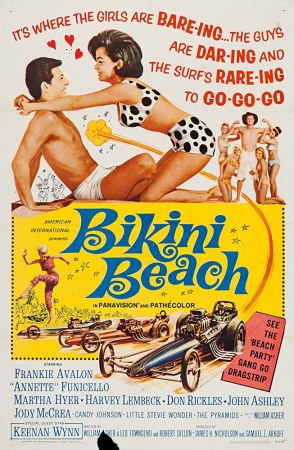 Plot:
Harvey Huntington Honeywagon III (Wynn) tries to prove that the mental capacity of Amerian teenagers as devolved to that of his chimp, Clyde the Chimp (Prohaska). Schoolteacher Vivien Clements (Hyer) tries to prove Honeywagon wrong. Meanwhile, during summer vacation on the beach, boyfriend and girlfriend Frankie (Avalon) and Dee Dee (Funicello) disagree – she feels he should settle down and get a job and he wants to live fast. Frankie finds competition in a visiting English rock star, Potato Bug (also Avalon).

Trivia:
• Visitors to the set didn’t realize Potato Bug was Frankie Avalon, according to the DVD liner notes.
• The third beach film to star Frankie and Annette.
• Surfers including Mickey Dora
• Keenan Wynn and his son Ned Wynn both appear in this film. Keenan as the antagonist and Ned as an uncredited surgery.
• Clyde the Chimp is portrayed by Janos Prohaska, an actor who primarily portrayed animals and monsters.

My review:
I’ll go ahead and say that no American International Pictures beach musical was ever going to win an Academy Award.

They are zany, goofy, ridiculous nonsense, and I somehow always come back to watch them.

I hadn’t seen “Bikini Beach” (1964) since I first watched it more than 10 years ago. Watching it again, I wasn’t expecting to enjoy it, but I found myself laughing out loud at some of the insane movie plotlines.

For starters, Frankie Avalon plays a dual role: his usual role of Frankie and the British invasion rock star – Potato Bug. Potato Bug is bespectacled with a gap tooth, red wig and dressed like he’s on safari. He’s like a mix of Terry Thomas and Robert Morse, and while it is so stupid, I couldn’t help laughing out loud, especially when he sings “How About That” which is filled with “Yeah yeah yeah” and “woooos” that reference the Beatles popularity.

Secondly, Keenan Wynn’s character spies on the teens with a gorilla in toe, Clyd. His goal is to show that the gorilla is smarter than the teenagers, who only care about sex, surfing and dancing. But his ulterior motive is that he wants to clear the beach of the teenagers for the old folks resort, Siesta-by-the-Sea.

And like usual, the biker gang, the Rats led by Eric Von Zipper (played by Harvey Lembeck), cause trouble. Von Zipper decides Wynn’s character Harvey Huntington Honeywagon, is his idol.

All the while, Annette Funicello’s character of Dee Dee is angered by Frankie, because he wold rather kill himself racing race cars than get serious about their relationship and get a job so they can get married. So she turns to Potato Bug in her anger.

To illustrate how nuts this film is – we go from surfing Clyde the Chimp to Potato Bug within minutes.

Despite the insane storyline, this movie is colorful and has beautiful surf footage performed by famous surfers, like Mickey Dora.

It also has some great music. I love the Annette and Frankie duet, “Because You’re You.” We also have a performance of the surfing rock band, The Pyramids, who includes guitarist Willie Glover, one of the few Black surf musicians.

We also have a performance from 14-year-old Stevie Wonder who closes out the film, and is billed as “Little Stevie Wonder.”

With most beach films, I feel like parts are really enjoyable and others are difficult to watch. I feel like if Harvey Lembeck’s gang were omitted from these movies, they would all be better.

But regardless, they all are fun with a zany summer feel.