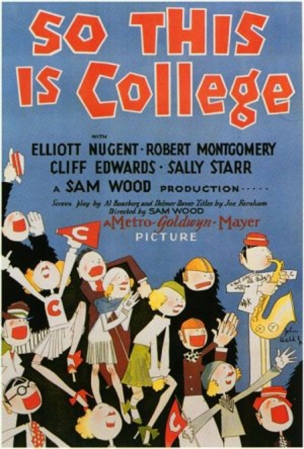 Plot:
University of Southern California college seniors Biff (Montgomery) and Eddie (Nugent) are best friends, fraternity brothers and teammates on the football team. But when they both fall for Babs (Starr), the two get competitive with each other, without realizing she’s playing the two off each other.

Trivia:
• Early in the career of most of the performers:
– This was the second feature film of Robert Montgomery
– Sally Starr was in a few movies in 1917 and 1918, but was spotted in a stage revue and signed for this film.
– The third film of Cliff Edwards.
– The fourth feature film of Elliott Nugent
• The football game footage was from the 1928 USC vs. Stanford game played on Nov. 3 with 80,000 in attendance. USC was named national champions that year.
• Director Sam Wood’s first talking picture.
• Several scenes were shot on the University of Southern California campus.
• MGM also released a silent version.
• Working titles included “College Life” and “Happy Days.” 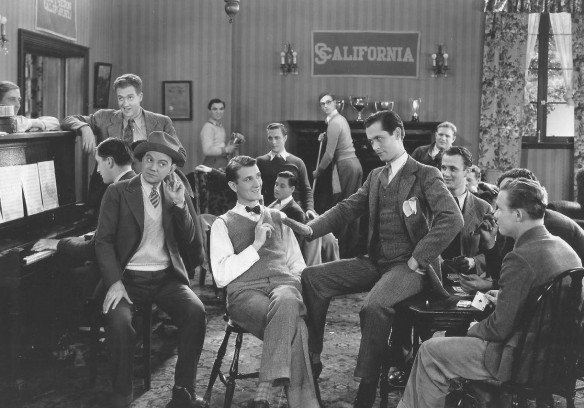 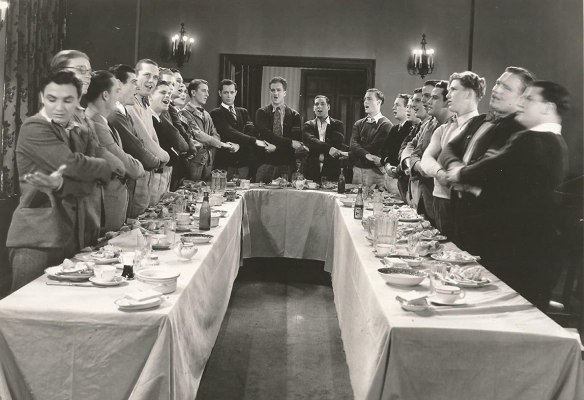 Montgomery and Nugent performing the friendship song with their fraternity. 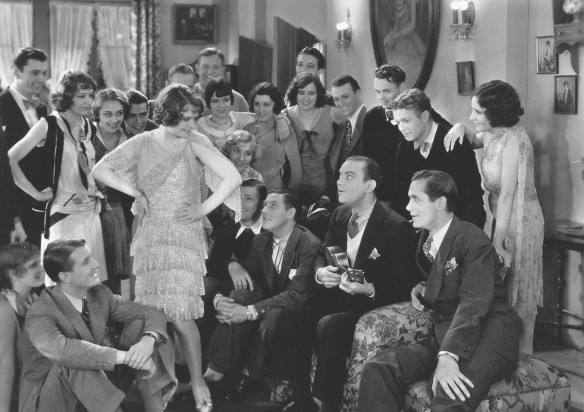 My review:
As I’ve mentioned many times, some musicals made in the early days of sound can be hard to watch and rather messy. Often, they aren’t cohesive and the songs are haphazardly placed through the film.

“So This is College” (1929) is better than most early musicals but is still a bit of a mess. But … it works because college and college students can also be kind of a mess too.

It’s zany in areas, and the part that’s the most frustrating is that the sound can be hard to hear in areas. I wonder if this is because movie studios were still trying to figure out the best way to capture dialogue on microphones.

However, what I like about this is that compared to most college movies of this era, it seems a bit more … realistic (especially to the era) and critics of 1929 agree.

“Well, of all the surprises! Here’s a college picture that acts and looks like college,” according to the Chicago Herald-Examiner.

It helps that most of the actors were in their 20s, so being a college student wasn’t a stretch (like when Bing Crosby was in college films in the mid-1930s while in his mid-30s).

The cast of “So This is College” features new talent and fresh faces for 1929, because Sam Wood was looking for young actors to play realistically aged students, according to “The First Hollywood Musicals” by Edwin M. Bradley.

All of the film’s leads were early in their film careers: Elliott Nugent, Robert Montgomery, Cliff Edwards and Sally Starr. Nugent, Montgomery and Starr were all from the stage.

Montgomery was in his second feature film and went on to be one of MGM’s top stars. He sings a bit in the film. It may not be the best, but also not bad. I love to hear non-singers perform in the films.

Sally Starr was spotted in a stage revue and signed to MGM for this film. Starr resembled Clara Bow and went on to play similar roles to this one – the flirtatious campus sweetheart.

I wasn’t familiar with Elliott Nugent before this film, and he was the oldest in the cast. Nugent was perhaps slightly more established than his co-stars – already directing a film and also acting in bit parts in silent films. He also was already a playwright, partnering as a writer with his father J. C. Nugent.

And of course, there’s Cliff Edwards – who audiences had already seen for the first time in “The Hollywood Revue of 1929” performing “Singin’ in the Rain.” Today, fans know Edwards best for his role at Disney as the ongoing voice of Jiminy Cricket and “When You Wish Upon a Star.”

The songs are also fun and lively – especially “Sophomore Prom.”

The film is set at the University of Southern California and has exterior shots at the college campus. In the film’s big football game, scenes were used from the 1928 USC-Stanford game.

“So This is College” is overall fun. It’s filled with dances, dates and football games.

Is “So This is College” the best? No. But it does make me wish that I was in college in the 1920s because it seemed more fun.