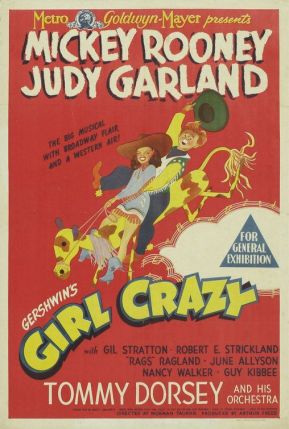 Plot:
Wealthy collegiate playboy Danny Churchill Jr. (Rooney) often frequents the headlines for his philanderings. Tired of reading about his son in print (and not for academics), his father (O’Neill) pulls Danny out of Yale and sends him to the desert of Arizona to all-male Cody College of Mines and Agriculture. While Danny adjusts to a more active lifestyle, he meets postmistress Ginger Gray (Garland) and granddaughter of the man who runs the college, and falls for her. However, when the college is failing enrollment, Danny hatches a plan to get more students.

Trivia:
• Last film of Jimmy Butler, who was killed in World War II.
• The last feature film that starred Judy Garland and Mickey Rooney, but it was their ninth out of 10 appearances on screen together. They later made a specialty appearance together in WORD AND MUSIC (1948), which was their last performance on screen together.
• The film is based on the 1930 Broadway musical “Girl Crazy” with words and music by George Gershwin, lyrics by Ira Gershwin and book by Guy Bolton and John McGowan. Ethel Merman made her stage debut in the musical and the Broadway musical also made Ginger Rogers a star.
• After the “I’ve Got Rhythm” number was directed by Busby Berkeley, he was replaced by Norman Taurog and Charles Walters staged the other dance numbers. In the credits, he is billed for the “I’ve Got Rhythm” number, according to Buzz: The Life and Art of Busby Berkeley by Jeffrey Spivak.
• Film remake of Girl Crazy (1932) starring Bert Wheeler, Robert Woolsey and Dorothy Lee.
• Remade as When the Boys Meet the Girls (1965) starring Connie Francis and Harve Presnell.
• Early film for Nancy Walker and June Allyson, who had just started at MGM for “Best Foot Forward.”
• Filmed in the desert area of Palm Springs, CA.
• First film of Robert E. Strickland.
• Gil Stratton’s first credited role and his second film. 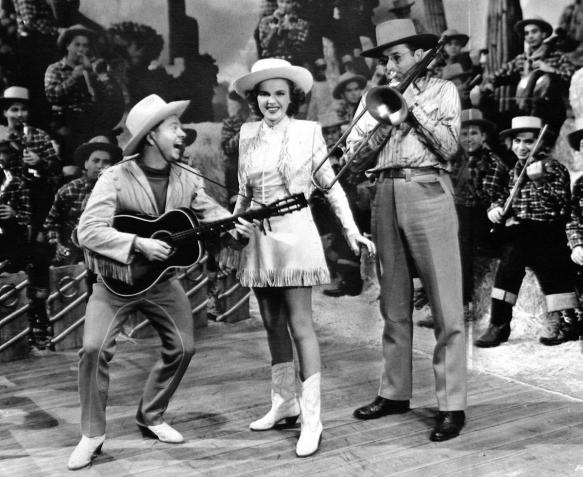 Highlights:
• “Embraceable You” danced by Judy Garland and Charles Walters.
• Tommy Dorsey and His Orchestra

My review:
From Andy Hardy films to their “let’s put on a show” musicals, Judy Garland and Mickey Rooney became not only the most popular teenage stars, but one of the most popular screenteams.

In 1943, the two starred together for the last time in a feature film — “Girl Crazy.” (The appeared together once in 1948 in the musical performance “I Wish I Were in Love Again” number featured in “Words and Music” but this was their last time in starring roles together).

Recently released on a new Blu-Ray by Warner Archive, the film follows Danny, a New York City playboy, played by Mickey Rooney, whose father sends him out west to an all-boy school when he’s tired of the partying and women. While out west, Danny has to wake up early, ride horses, and work — none of which are his cup of tea. However, Danny decides to stay in Arizona when he meets the pretty postmistress, Ginger, played by Judy Garland, who is also the granddaughter of the dean, played by Guy Kibbee. Out of his love for Ginger (and not loyalty to the school), Danny helps hatch an idea to increase school enrollment when the college is on the verge of closing.

With every song written by George and Ira Gershwin, there isn’t a bad song or dance performance in “Girl Crazy.” It is filled with memorable and famous songs, but while they are all familiar standards, they have their own unique sound.

Some standouts to me are Judy Garland’s western campfire version of “I’m Biddin’ My Time.” I also love the big band version of “Fascinating Rhythm” performed by Tommy Dorsey and His Orchestra.

One of my favorite performances is “Embraceable You” performed by Judy Garland at her character’s birthday party. Garland is pushed around on a piano by the students, who all are smitten with her character. The one who gets to dance with her is the film’s dance director, Charles Walters, in a rare film appearance. Garland and Walters have fabulous chemistry, and I would argue Walters coaxed one of Garland’s best dance performances.

And of course, I can’t forget to mention the grande finale of “I’ve Got Rhythm,” which is approximately seven minutes long. Judy Garland joked to co-star Nancy Walker that they only sang 40 choruses of the song and that may not be an exaggeration.

Directed by Busby Berkeley, the number starts off fun and energetic and then gets a bit carried away. Girls in suede fringe and boys in cowboy outfits join Garland and Rooney and Berkeley shows their feet clad in cowboy boots running upstairs of a platform. This shot immediately reminded me of the “Lullaby of Broadway” number he staged in “Gold Diggers of 1935.” Usually innovative and exciting, this number by Berkeley felt tired and overly strenuous, ending with twirling whips and firing guns.

Tired is also how you can describe the dancers, because the number proved to be too strenuous for Judy Garland and Berkeley was dismissed as director of the picture and replaced with Norman Taurog, according to Buzz: The Life and Art of Busby Berkeley by Jeffrey Spivak. Berkeley has a special title card at the film credits noting that he directed “I’ve Got Rhythm.” In his absence, Charles Walters staged the rest of the numbers.

Similarly in “Best Foot Forward,” don’t let the billing of June Allyson scare off those who hate her (which again, I don’t understand). Allyson is a speciality act, performing “Treat Me Rough” at the very start of the film. Her performance is very Betty Hutton-like as she roughs up Mickey Rooney.

Based on the 1930 Broadway musical, I haven’t seen the Wheeler and Woolsey version of this film (I’ll eventually suffer through that). But I have seen the 1965 remake “When the Boys Meet the Girls” (1965) with Connie Francis and Harve Presnell (more on this version next week).

While I prefer the 1943 version to the 1965 version, it does seem like the 1965 version may be closer to the Braodway play. The Broadway version has to do with a dude ranch, rather than a college.

I think this film is lots of fun and has excellent music. The only downside is an overly long comedic radio skit performed by Mickey Rooney, pretending that he’s a radio announcer giving play by play of sports. It’s random and I’m not sure why he does it – seemingly to cheer up Judy Garland who also seems bewildered and not amused.

But if you enjoy the great American song book, MGM musicals, collegiate films and young talent, “Girl Crazy” is for you. It does feel maybe 20 minutes longer than it should be, running at 100 minutes, but is still lots of fun.