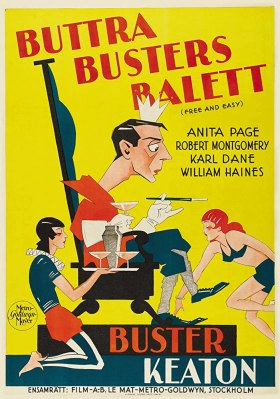 Plot:
Elvira Plunkett (Page) is Miss Gopher City Kansas after winning a beauty contest. The award sends her to Hollywood with her mother (Friganza) and manager Elmer Butts (Keaton) to become a star. While in Hollywood, Elmer tries to get a screentest for Elvira and himself. Meanwhile, though Elmer is in love with Elvira, she falls for movie star Larry Mitchell (Montgomery). 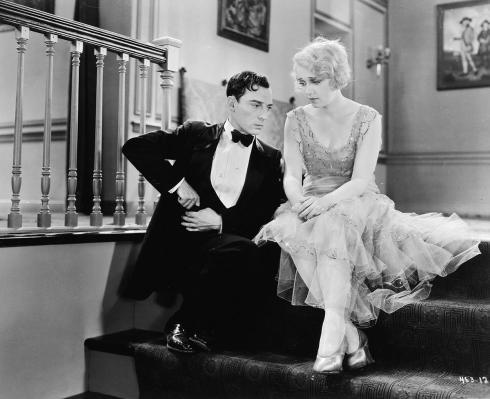 Buster Keaton and Anita Paige in “Free and Easy”

Robert Montgomery and Anita Paige in “Free and Easy”

My review:
If you know nothing about Buster Keaton, and his career “Free and Easy” (1930) is a relatively pleasant way to pass an hour and a half.

But if you are familiar with Keaton’s talent and career (especially before he gave up his independence and went to MGM), it’s rather depressing.

“Free and Easy” (1930) is what people today call “meta” – a Hollywood film about Hollywood. As the manager of Elvira (Anita Paige), Elmer Butts (Buster Keaton) travels from Kansas to Hollywood after Elvira wins a beauty contest. The two try to break into Hollywood and meet various real-life actors and directors on the studio lot. Elvira falls in love with famous actor Larry Mitchell (Robert Montgomery) while Elmer and Elvira’s mother (Trixie Friganza) become unexpected movie stars.

In his silent films, Buster Keaton is often behind the eight ball: He usually isn’t as rich, tall or successful as his male antagonists. Despite his character’s shortcomings, Keaton is always the hero and usually gets the girl at the end of the story.

But in his first leading role in a talking picture, Keaton’s “Free and Easy” character may be the lead character, but he is not the hero. As Elmer Butts, Keaton is pathetic and bumbling, which is never what his characters were in his earlier films. He isn’t a hero and doesn’t get the girl. While the movie is alright (particularly in comparison to other early talkies), this is a downgrade in comparison to his earlier films.

At the end of the film, Buster Keaton is dressed in an overexaggerated costume for a musical number that is being shot for a film within the film. Keaton later said that he thought the clown makeup was the most ridiculous thing he had ever done, according to the book Buster Keaton: The Persistence of Comedy by Imogen Sara Smith. The costume is padded with fake muscles, which is silly since Keaton was actually very athletic. In the same scene, Keaton was put on strings like he’s a marionette puppet. His biographer said the puppet scene was similar to how Keaton was being treated by MGM. The issue here wasn’t necessarily talkies, it was that Keaton had given up his independence to work for MGM and had little say in his pictures anymore. Keaton was actually interested in sound films, advocating for “Spite Marriage” (1929) to be a talkie picture. He realized that talkies were the future of films, according to biographer James L. Neibaur.

While it’s sad to see what became of Buster Keaton’s career, seeing Keaton in a musical actually cements what we all knew: He really could do it all.

While there are only a handful of musical numbers in “Free and Easy,” we get to see Keaton sing and dance – and he does it pretty well too! Even in the ridiculous oversized jodhpurs and clown make-up, Keaton skillfully dances in the finale and may know the dance steps better than the other dancers.

Robert Montgomery supposedly sings too, though because of the high range he sang in, I suspected he was dubbed. However, I couldn’t find anything to the contrary.

While “Free and Easy” is an interesting look at early sound and fairly entertaining, I found it all downright sad. Buster Keaton’s sad clown character seemingly paralleled his real life. But I won’t deny that I loved seeing him sing and dance.