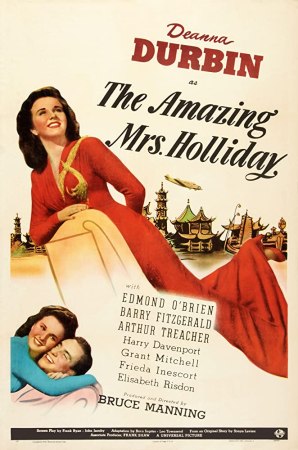 Plot:
Ruth (Durbin) is an American who grew up with China with her missionary parents. After they died, she worked at a school and helped war orphans. When China was invaded by the Japanese, Ruth and the orphans leave to get to a safer area. With the help of Timothy Blake (Fitzgerald), Ruth and the eight children sneak on to Commodore Holliday’s cargo ship headed for the United States. When the ship is torpedoed, Ruth, the children and Timothy survive, and the Commodore dies. In order to get the children safely into the United States, Ruth poses as the Commodore’s widow. She runs into problems when she moves into the Commodore’s mansion and meets his wealthy relatives and grandson, Thomas Holliday (O’Brien). 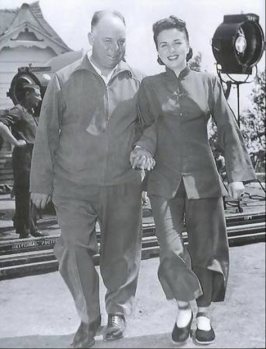 Jean Renoir and Deanna Durbin on the set of “Forever Yours,” which was released as “The Amazing Mrs. Holliday”

• Director Jean Renoir was originally assigned to the project. However, when filming started there was no screenplay. After two months of filming, Renoir was able to quit the project. The official reason given was that he was having issues with his leg. But the real reason was that he was given dialogue to shoot the moment before they started shooting, according to the book Jean Renoir: A Biography by Pascal Merigeau.

• The scenes set in China may be the scenes Renoir filmed, according to Merigeau’s book.

• The working titles were “The Divine Young Lady” and “Forever Yours.”

My review:
Sometimes while watching a movie, I have to weigh if it’s a musical or not.

A film like “Seven Brides for Seven Brothers” with lots of singing and dancing is an obvious “yes” when it comes to a traditional movie musical.

But in the case of “The Amazing Mrs. Holliday,” the choice isn’t so obvious. The story is more a family drama mixed with comedy about World War II-era orphans. BUT the film stars operatic star, Deanna Durbin, who is known for her beautiful voice. Durbin also sings four songs in the film, so I made the executive decision (and put it to a vote on Twitter), that this is a musical. (Truthfully, it’s more of a musical than other films I’ve featured, like Heidi).

With that out of the way – I love “The Amazing Mrs. Holliday.” It’s one of my favorite films. 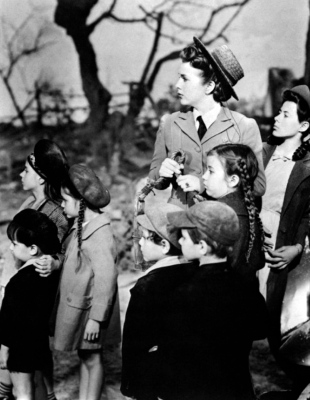 Deanna Durbin with the war orphans in “The Amazing Mrs. Holliday”

In the film, Deanna Durbin plays Ruth, a missionary who left China to protect the eight war orphans who were left in her care. She and the children stowaway on a boat, which is torpedoed. Upon arriving in the United States, the children unable to gain entry into the country. Barry Fitzgerald plays Timothy, a ship’s mate, who hatches an idea that Ruth is the widow of Commodore Holliday, who went down with the boat, and says that the Commodore adopted all the children. Ruth and the children move into the Commodore’s mansion. Ruth runs into trouble with the Commodore’s relatives and his handsome grandson, played by Edmond O’Brien.

Durbin was 15 when she first entered films, playing mature but precocious teenagers, like in “Three Smart Girls” and “That Certain Age.”

Now, Durbin was 23 and the goal of the film was to promote her as an adult.

Director Jean Renoir had just signed with Universal and was signed on to the picture. Renoir thought Deanna Durbin was friendly and had enough talent to get out of what he called the “kiss-and-cuddle genre.”

Renoir said he enjoyed working with Deanna Durbin and filming the children, but he was held up by producer Bruce Manning, who was writing the script as Renoir was trying to film.

However, while you can see some of Renoir’s fingerprints on the filming, he left the project before it was complete, and Bruce Manning took over.

The film was going to be shelved – but fortunately for us – it wasn’t. And despite the issues with filming, it doesn’t show.

“The Amazing Mrs. Holliday” is a film that has me laughing one moment and crying the next. Deanna Durbin plays her role sincerely. Her character had deep concern for the children, and though she has fooled the Commodore’s family, it’s all to help the orphans that have lost their parents. While we see her great talent in the film, we also get to hear her beautiful voice.

For those who know Edmond O’Brien for his post-war film noirs, with some this film is a treat. O’Brien has the opportunity to play the handsome leading man with some comedy mixed in and also shows sincerity towards the children. I’ll just be honest – O’Brien is downright hot in this movie.

There is a very funny scene where Ruth is dressed in evening clothes and sitting down to her first fancy American dinner party. She struggles with a cherry in a fruit cocktail and Arthur Treacher “tut tuts” from afar about how she should proceed. Mitchell, Inescort, Risdon and Hale (who play the Commodore’s relatives) silently cheer her on as she chases the cherry around the table with her spoon.

Also an added bonus are the adorable children in the film. This film depicts well what the war did to children. The child actors are all so sweet and heartbreaking in other scenes. For example, used to bombing in China, they all hide and scream when American planes take off overhead.

I could go on and on about how much I love “The Amazing Mrs. Holliday,” but I recommend seeking this one out. It’s lovely, sweet and also quite funny. I don’t think you will be disappointed. 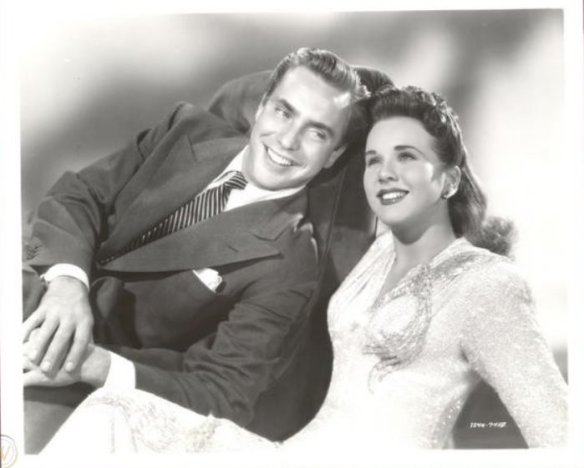 Edmond O’Brien and Deanna Durbin in a publicity photo for “The Amazing Mrs. Holliday”