Plot:
Mary Hale (MacDonald) and Jimmy Seymour (Ayres) are a team on the stage with Jimmy playing the piano and Mary singing. They are also an off-stage team – the two are married though they hide that from many employers. When Broadway producer Larry Bryant (Hunter) hears Mary sing, he is smitten and convinces Cornelius Collier, Jr. (Morgan) to put her in his next show. Unfortunately, this offer isn’t a package deal and hot-tempered Jimmy is left behind. As her fame grows, the two also grow apart. 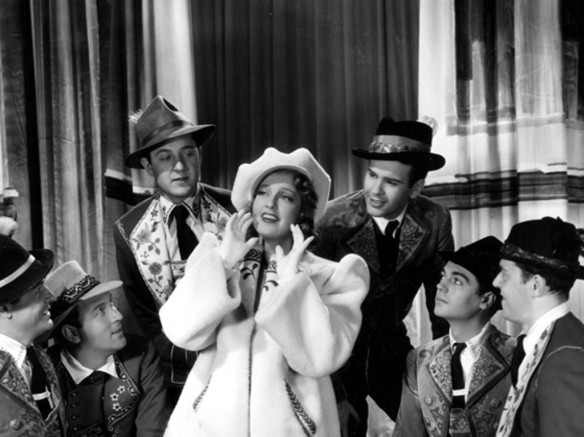 Other trivia:
• Walter Pidgeon and George Murphy were considered for the lead roles.
• Katharine Alexander is dubbed by Mary Kent.

My review: Searching for the “1939 feature”:
This week’s 1939 started out as a Musical Monday, but when I realized it was released in 1939, I pivoted to highlight this as a film released during Hollywood’s greatest year.

In “Broadway Serenade,” Jeanette MacDonald and Lew Ayres play married couple Mary and Jimmy. The two have an act where Mary sings and Jimmy plays the piano. Jimmy is hot-headed and the pair are often fired when Jimmy gets in a fight with someone. One night while they are performing, Mary is discovered by Broadway producer Larry Bryant, played by Ian Hunter, who wants to hire her for a new show – not only because she’s talented but also because he’s smitten. Though Jimmy isn’t part of the deal, he encourages her to take the opportunity; separating them for the first time. Jimmy becomes jealous, because of gossip items with Mary and Larry. The two are driven apart by fame and jealousy.

You could almost consider “Broadway Serenade” (1939) a Christmas film – the movie begins on Christmas, showing us Mary and Jimmy’s humble surroundings and their dreams of Jimmy composing a hit song. We see Christmas again mid-way through the film and their lives are drastically different. Mary is a Broadway musical star and has just filed for divorce from Jimmy. Jimmy is working in a five and dime store playing piano for those who want to purchase sheet music.

In 1939, Lew Ayres and Jeanette MacDonald were still two of MGM’s top stars. Ayres was particularly, as his Dr. Kildare series was gaining popularity that year. While everyone is used to seeing MacDonald with Nelson Eddy, I think she and Ayres make a great pair.

“Broadway Serenade” also includes an excellent supporting cast with Frank Morgan, Rita Johnson, Ian Hunter, Virginia Grey, Esther Dale and Al Shean. Like in many films, I feel sorry for Ian Hunter. He’s so kind, but rarely gets the girl (sort of like Ralph Bellamy, but he gets the girl sometimes at least).

On the whole, the musical portion is fairly standard of most MGM and MacDonald films. However, do watch for the incredibly strange finale. Frank Morgan’s character says he wants it to be an impressionistic number, and he isn’t fooling. All the performers from musicians to singers and dancers have these strange (almost terrifying) masks – and the mouths even move for singing. One of the most strange MGM numbers of this era.

At any rate, this is a fun musical. Don’t sleep on it just because you want Nelson Eddy.

The strange finale in “Broadway Serenade”