Plot:
A gun is found in the ceiling of an old cabin where the Hamilton couple used to live. Margaret Hamilton (Allan) moved after the death of her husband Tommy. When the new owner finds the gun and sees the gun has two empty shells (indicating that it was once fired), he calls the police. Margaret is then contacted by the police and her deceased husband is exhumed. Margaret is then tried in Coroner’s Court, which is accusing her of killing her husband. 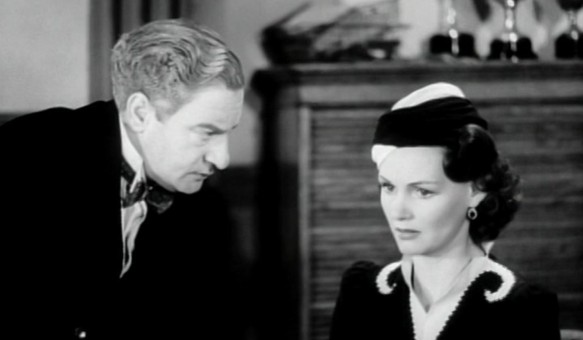 Other trivia:
• Visatone Sound Recording System was used for the sound of this film, which was only used on a handful of films.
• The film focuses on the Coroner’s Court, which is seen as not as fair. The definition of the Coroner’s Court in the United Kingdom is as follows:
The coroner’s court is a court of law, and accordingly, the coroner may summon witnesses. Those found lying are guilty of perjury. Additional powers of the coroner may include the power of subpoena and attachment, the power of arrest, the power to administer oaths, and sequester juries of six during inquests.
• Written prologue of the film is:
‘The office of Coroner is of great antiquity and no satisfactory account of its origin can be given.’ Halsbury’s “The Laws of England.”
‘It is even more difficult to give a satisfactory reason for its continuance.’ ‘English Justice.
• Directed and produced by brothers Ray Boulting and John Boulting, respectively.
• Adapted from a play by Michael Barringer.
• An earlier version of Michael Barringer’s film was made into a film in 1931 under the same title. It starred Mary Glynne, Campbell Gullan and Sidney Morgan.

My review: Searching for the “1939 feature”:
While “Inquest” was made to be shown as a low-budget double feature, this 57-minute crime mystery a surprise: it was much better than I expected it would be.

The film begins when a gun is found in the ceiling of an old home. Because two shots are fired and the gun was hidden, it is automatically assumed that the gun was a murder weapon. The suspect is Margaret Hamilton, played by Elizabeth Allan, who lived in the house with her husband who died suddenly. His body is exhumed and Margaret is tried by a coroner’s court, which is defined in the UK as:
The coroner’s court is a court of law, and accordingly, the coroner may summon witnesses. Those found lying are guilty of perjury. Additional powers of the coroner may include the power of subpoena and attachment, the power of arrest, the power to administer oaths, and sequester juries of six during inquests.

Knowing nothing about this film or most of the actors entering this film, my expectations were low. I thought it would have a terrible storyline like other brief, low-budget 1939 films I have described. The only actor I was familiar with was Elizabeth Allan, who starred in MGM films in the early and mid-1930s.

However, the whole film I was kept on the edge of my seat wondering what really happened. The end takes a sudden and unexpected twist.

The film also may have a social message. It begins with a prologue:
‘The office of Coroner is of great antiquity and no satisfactory account of its origin can be given.’ Halsbury’s “The Laws of England.”

This made me wonder if the goal of this brief film was also to criticize the coroner’s court.

This film was also an early feature project where twin brothers Ray Boulting (director) and John Boulting (producer) partnered. The two later collaborated on films like Thunder Rock (1942), The Family Way (1966) and There’s a Girl in My Soup (1970)

While not the most notable film of 1939, this British “quota quickie” is a sleeper. Check it out for the surprise ending.