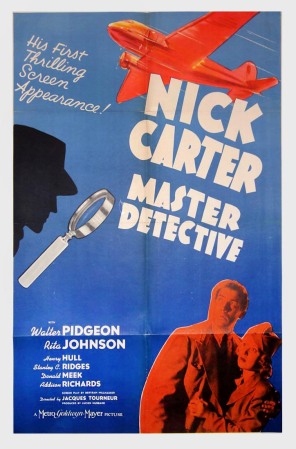 Plot:
Undercover detective Nick Carter (Pidgeon) is hired to investigate how top-secret blueprints continuously go missing from the Radex Airplane Factory. The airplane plant is working to develop a high-speed plane for the government, and spies are working to get their hands on the plans. 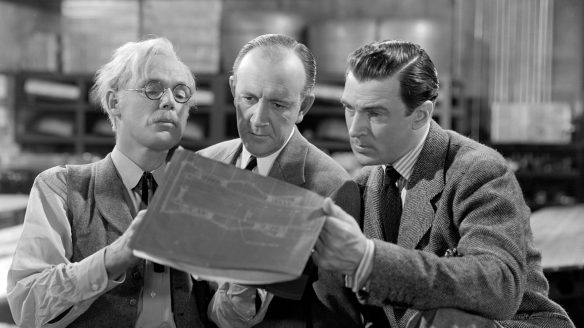 Other trivia:
• The factory and plane shots were filmed at Lockheed Airplane Works in Burbank, CA.
• The film is based Nick Carter novels dating back to 1886. The character of Nick Carter was created by Ormond G. Smith and John R. Coryell.
• Though these films are based on the novels, this film and those that follow were original stories.

My review: Searching for the “1939 feature”:
In the late-1930s, studios were churning out films lead by a detective (amateur or professional) solving all sorts of crimes. From Bulldog Drummond, Mr. Motto, The Saint, Mr. Wong or Charlie Chan.

In 1939, MGM introduced a new detective, Nick Carter. Based on a literary character created in 1886, the character was represented in French and German films as early as 1908. But Walter Pidgeon was the first to play the role in a Hollywood film.

Nick Carter, Master Detective (1939) is the first of three Nick Carter films, with the last two released in 1940 and all starring Walter Pidgeon with his unexpected sidekick, played by Donald Meek.

In “Master Detective,” Nick Carter is hired by the Radex Aviation Company to uncover how top-secret government aircraft plans are making their way into enemy hands.

This film moves quickly and is only 59 minutes long. But don’t disregard it as quick, B-movie fluff. “Nick Carter, Master Detective” was an early Hollywood directorial project of Jacques Tourneur. In 1939, Tourneur received his first feature-film directorial credit and this was his second project that year.

Even three years before “The Cat People” (1942) and eight before “Out of the Past” (1947), you can see director Tourneur’s touch on this brief film.

Tourneur later described the character of Nick Carter as “a little bit the James Bond of the time,” according to his biographer Jacques Tourneur: The Cinema of Nightfall by Chris Fujiwara.

Throughout this 59 minute film, Tourneur treats it like a major project, including using unique shots and angles.

For example, as a plane is crashing, Tourneur uses quick and disorienting close-ups of bystanders. He goes back and forth from the falling plane to a face then back to a plane and then back to a face again – using a jerky zoom-in on an alarmed expression. This effect makes the scene feel even more startling, tragic and disturbing.

Or he shows Nick Carter playing with a ball-bearing dexterity puzzle, trying to unnerve the person he’s talking too – zooming in on Carter trying to fit the tiny balls into the holes of the handheld game. Now I should point out before you go in – the puzzle also uses a racist joke. The image on the game is a Black child with the ball bearings fitting into the teeth.

Tourneur’s direction helps this B-film feel more elevated probably than it should. It’s an hour-long filled with great storytelling and adventure.

Walter Pidgeon, who is a personal favorite of mine, is great in the role. When he’s talking with the head of aircraft company, he compares himself to other silver screen detectives saying he’s not like them.

Tourneur may be right on the money when comparing Nick Carter to James Bond. Pidgeon is suave and distinguished, but also intelligent. We see some daring stunts as well, as he shoots from a plane.

Carter’s unwanted companion Bartholomew is played by Donald Meek who is a hilarious highlight (per usual). While Carter is followed by Bartholomew in this film, he’s more of an official sidekick in the following films.

While I wish the MGM Nick Carter series continued beyond just two films, perhaps they ended at the right time. These three Meek and Pidgeon films are entertaining gems.