Plot:
Bob Jordan (Billy Daniels) is a struggling songwriter. Barbara (Guyse), the adopted daughter of his landlady (Offley), helps him put lyrics to his song, “Cinderella.” Bob’s song becomes a hit, which throws him into society. Bob catches the attention of Vivian (Tondelayo), who owns a nightclub, and replaces her current bandleader (Blakey) with Bob. Vivian’s liking of Bob causes troubles with her fiance and hurts Barbara, as their romance is in the tabloids.

Trivia:
• Sidney Poitier’s first film. He plays an extra as a night club patron, according to his biographer in Sidney Poitier: Man, Actor, Icon by Aram Goudsouzian.
• First film of singer Billy Daniels, who was billed as Billy Daniel.
• Only film of Dusty Freeman and Tondaleyo

My review:
In 1948, singer Billy Daniels recorded what became his signature song, “That Old Black Magic.” In 1950, his recording sold 1 million copies.

But a year before fame came to Billy Daniels, he was performing in night clubs and appeared in his first film, the race film, “Sepia Cinderella” (1947).

Billed as Billy Daniel (with no s), he plays Bob Jordan, a songwriter and musician who writes a hit love song,”Cinderella.” The song leads him to high society and the job as a nightclub bandleader (at the expense of another bandleader’s career). His success separates him from Barbara (Sheila Guyse), who is in love with Bob. As Bob raises higher in the ranks of society and has a romance highlighted in the gossip columns with an engaged nightclub owner. Eventually, he falls out of favor with the engaged nightclub owner and is fired. When business declines, Bob is hired back, along with the bandleader he replaced. As a publicity stunt, a Cinderella contest is held, where ladies leave their shoes at the front and Bob picks the winner. He picks Barbara’s shoe, who has been in love with him all along.

The film is a quick-moving story about the cost of success. Sprinkled throughout are other musical performances highlighting performers like Deek Watson and The Brown Dots and Ruble Blackley.

In addition to Billy Daniels, a major highlight of this film is Sheila Guyse, who has been in every Musical Monday that I have highlighted this month (Miracle in Harlem, Boy! What a Girl). I have started researching the Guyse, who retired by 1959 due to illness and her husband’s wishes. Due to the racial restrictions put on Guyse throughout the 1940s and 1950s, she never reached the level of stardom that I feel she deserved.

While racial stereotypes don’t play a prominent role in this film, like they do in other racial films, there are a couple of things that should be noted:
– Black actor Al Young plays a “Chinaman” in one scene.
– The title “Sepia Cinderella” perhaps isn’t quite polite.

A real oddity of the film (and also highlight) is the extremely random cameo by former child star Freddie Bartholomew. This was Bartholomew’s first film appearance since 1944 after leaving the military, which he notes in this scene. Bartholomew is visiting the Cinderella Club and has a lengthy chat with Billy Daniels. He tells three jokes and quotes Shakespeare. It’s great to see Freddie as an adult, but also very very strange. Was appearing in a low budget film as himself a way to revamp his career? I’m not sure. He didn’t make another appearance until 1949 on television. Bartholomew is also with a woman who he introduces as Miss Blazier, who I believe was the film’s costume designer, Ann Blazier. 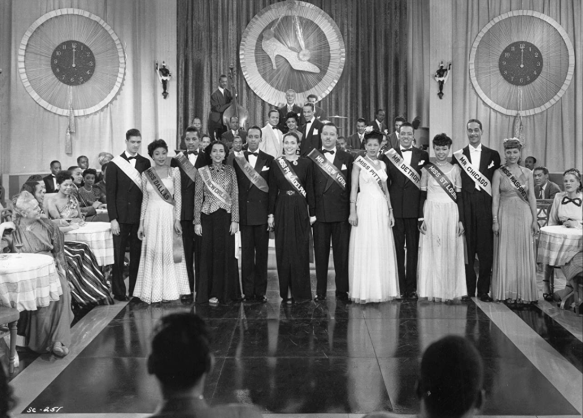