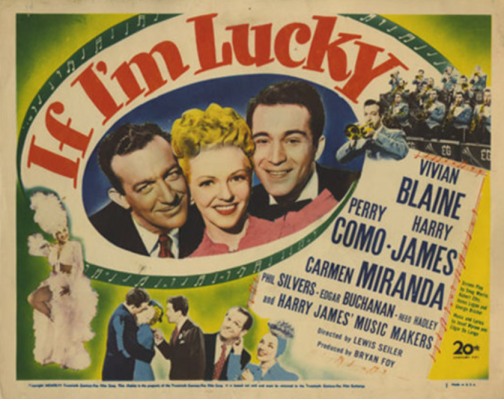 Plot:
A down on their luck band is managed by Wally Jones (Silvers) with trumpet player and bandleader Earl Gordon (James), harpist Michelle O’Toole (Miranda) and singer Linda Farrell (Blaine). The band runs across a political rally for Darius J. Magonnagle (Buchanan) and holds an impromptu concert for the rally. Their music brings people in, so Magonngle hires the band for his campaign for governor. Along the way, the band hires crooner Allen Clark (Como). When Magonnagle is sabotaged by a political machine, Allen is thrown into the race for governor. 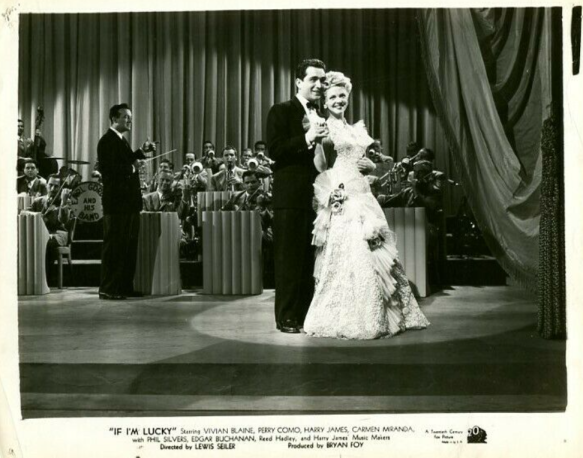 Perry Como and Vivian Blaine in “If I’m Lucky.” 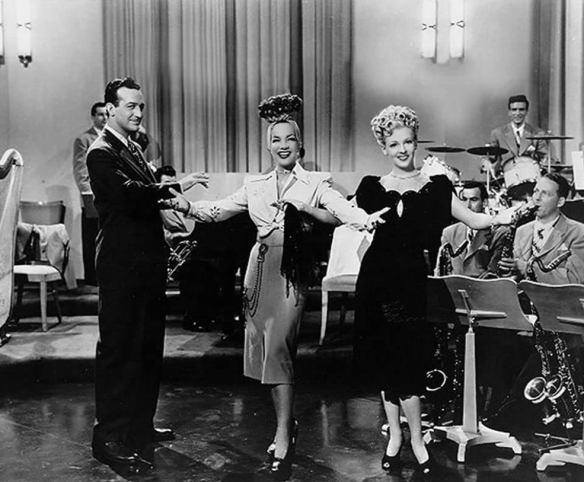 My review:
It should be a crime to put Carmen Miranda in black-and-white.

And who dyed Vivian Blaine’s beautiful, red hair blonde (though it was probably a wig)?

In the film, a crooner, played by Perry Como, gets roped into running for governor, though he would rather perform with his band.

While a mostly enjoyable film, there are so many odd things going on here. Perry Como, best known as a recording artist and his television specials, plays the lead actor in this film. This is a rare film role for Como. He signed with 20th Century Fox in 1944, and in the three films, he made with the studio, each starred actress Vivian Blaine. But “If I’m Lucky” was the first film where he played Blaine’s romantic lead.

While I adore Como as a singer, as a leading man, he is only okay. As he attempted to dance a bit in the dream sequence “One More Vote,” I just thought, “Bless his heart,” because he did his best.

The real highlight to me is Harry James. Trumpet player James usually plays himself in films, but here he plays a character. And most importantly … Harry James sings! In two songs! Is he the best singer? Not really, but I loved it. If you have followed read this website long enough, you know that I love to see a non-traditional singer warble a tune.

What truly makes me sad about this film is that I feel like our lead actresses of Vivian Blaine and Carmen Miranda, are wasted as window dressing.

Blaine, previously red-headed and nicknamed the Cherry Blonde, is now … blonde. She’s still beautiful, but I don’t understand the change. Her hair remained blonde for the rest of her career. Blaine gets to sing a few songs but is mainly there to support Como as a love interest.

What’s really depressing is Carmen Miranda. This was Miranda’s last film under contract to 20th Century Fox, and there is a noted difference between this film and her previous films. It’s filmed in black and white rather than Technicolor, and it is 40 minutes into the film until we have a lavish Carmen Miranda number. Her costumes are toned down, and she wears more street clothes.

In a way, this change in costume and lines dignifies Carmen Miranda’s character more than being an over-the-top caricature. But it’s also a sign that 20th Century Fox was losing interest in Miranda’s entertainment brand.

The same goes for Vivian Blaine. After the studio dyed her hair red and promotes her as the Cherry Blonde, they dye her hair blonde and seem to downplay all of her talents here. Her career would soon end at 20th Century Fox as well.

Then, of course, Phil Silvers is in this movie. And that’s about all I’ll say about that.

Overall, “If I’m Lucky” is a fun movie, but it feels a little sad to see the end of Blaine Miranda’s careers at 20th Century Fox. But it’s also interesting to see Perry Como as a lead actor in a film.

I just can’t say that any of these actors felt too lucky to be in this film.