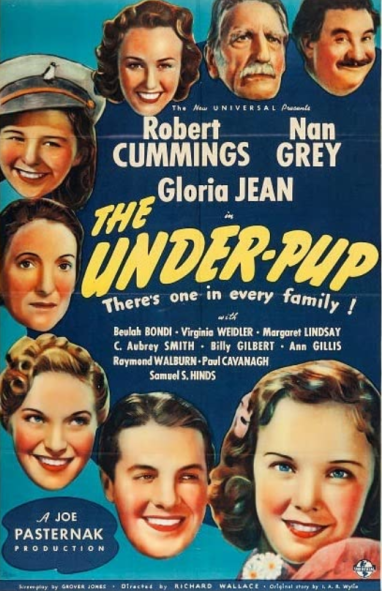 Plot:
Pip Emma (Jean) lives in New York City and is streetwise, loyal to her family and a beautiful singer. She wins a contest to go to summer camp with wealthy girls. Her excitement turns to dismay when they (Gillis, Mills) make fun of her. She only befriends one girl, Janet Cooper (Weidler), who is sad because her parents are getting a divorce. As Pip Emma stands up for herself, the girls slowly start to like her. 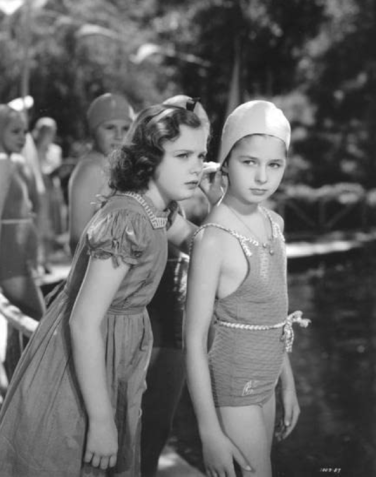 Other trivia:
• Followed by “A Little Bit of Heaven” (1940), which isn’t exactly a sequel, but has tie-ins to “The Under Pup.” Gloria Jean sings “The Penguin Song” and several characters are similar.
• The radio version aired on Lux Radio Theatre on April 15, 1940, with Gloria Jean, C. Aubrey Smith and Nan Grey.
• The film premiered in Scranton, Pa.

My review: Searching for the “1939 feature”:
Until watching “The Under-Pup” (1939), I had only seen child star Gloria Jean in one other film.

In this light-hearted summer film, Gloria Jean plays Pip Emma, who lives in the city with her quirky family. In conversation, she is quick to mention any of her uncles who have unique jobs. Pip Emma wins a contest to attend an exclusive summer camp, but is quickly disillusioned when she finds that the snooty girls aren’t welcoming and pick on her — all except one. As a subplot, the camp counselors are a football hero, played by Robert Cummings, and a young woman sensitive to Pip Emma’s problems, played by Nan Grey. Beulah Bondi is the stuffy matriarch of the camp, and C. Aubrey Smith plays Pip Emma’s grandpa who is known for hitting people with his cane if he gets too angry. Along the way, Gloria Jean treats the audience (and her fellow campers) to songs.

The young opera singing actress started in films in 1939 and acted regularly for 10 years. But today, she seems relatively forgotten — which I imagine is the lack of access of her films.

At the time of writing this post, I could only find one of her film’s that was released on commercial DVD (co-starring with Bing Crosby). Others are randomly uploaded online or you can buy a grey market DVRed version on eBay (which I am not above purchasing.)

Unfortunately, the print of “The Under-Pup” (1939) that I watched was pretty bad.

And while I watched this delightful film with terrible picture quality, it hit home that film preservation and access to films is so important. Why are Gloria Jean’s films made at Universal Studios so difficult to find?

It’s disheartening that there are so many movies out there that we will never see, because they have slipped through the cracks of being restored and released by major film companies.

I digress. Though I didn’t watch the best print, I really enjoyed “The Under-Pup.” It was funny and Pip Emma had some great antics, like forcing a girl to eat too much ice cream to do poorly in a swim race.

Another highlight is Robert Cummings early in his career, and Virginia Weidler always a standout in any film. I also have a soft spot for films with lots of young talent.

This film also had some excellent insults in it:
“You silly Billy dilly!”
“Oh, go wash your neck.”
I may start incorporating these into my everyday life.

If you are a Gloria Jean fan, let me know your favorite films … and hopefully I can find them somewhere.