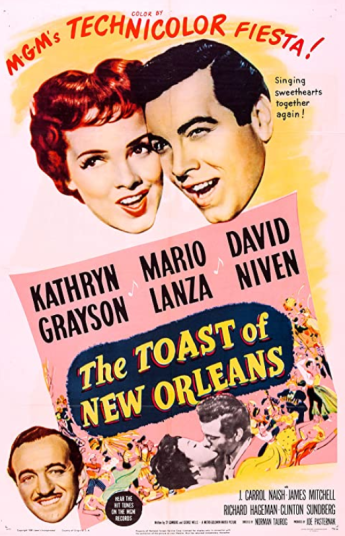 Plot:
Bayou fisherman Pepe Duvalle (Lanza) is discovered for having a beautiful opera singing voice by visiting opera singer Suzette Micheline (Grayson) and her manager Jacques Riboudeaux (Niven). Pepe is rough around the edges and has to be groomed to be presentable for society.

Trivia:
• Mario Lanza’s second film and the second and last film Kathryn Grayson and Mario Lanza co-starred in.
• Working titles included “Serenade to Suzette,” “Kiss of Fire” and “This Weekend Is Yours.”
• Armando Agnini, who was with the Metropolitan Opera, helped stage the opera performances.
• Nicholas Brodszky and Sammy Cahn were nominated for an Academy Award for their song “Be My Love.”
• Second film of Rita Moreno and the first film she is billed under the name Rita Moreno (she was billed as Rosita Moreno in So Bad, So Young). It was also her first film under contract at MGM. 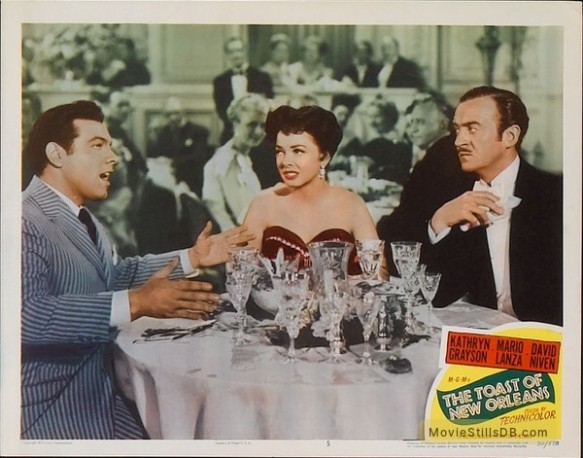 My review:
After the success of Mario Lanza’s first film, THAT MIDNIGHT KISS, MGM reteamed Lanza in another film with fellow opera singing star, Kathryn Grayson.

Their follow-up film was THE TOAST OF NEW ORLEANS (1950). This time, the two are in a period piece set at the turn-of-the-century in New Orleans. Grayson is Suzette, a visiting opera star with her manager, played by David Niven. They run across a Bayou fishing village, and one fisherman — played by Lanza — has a beautiful singing voice, but terrible manners.

While they groom the fisherman, Pepe, to be a first rate singer who can be presented to society, they also strip away his personality and his fisherman friends barely recognize him anymore. While this troubles him, no worries, he’s in love with Suzette.

Until revisiting THE TOAST OF NEW ORLEANS (1950) this week for this review, I hadn’t watched this since my first time viewing as a freshman in high school.

I remember not caring for it then, and I’m sorry to say that my opinion of the film hasn’t changed with this revisit.

I find the whole thing, a bit shrill. A large portion of the film focuses on the upper snobbish class judging the manners of bayou fisherman, especially as one of them tries to fit into opera. Both sides are written pretty irritatingly.

Mario Lanza and J. Carrol Naish play ill-mannered buffoons to the hilt. Lanza is picking up and carrying a theater doorman and Naish is constantly asking people in an exaggerated nasally voice “Don’t you know the ‘Tina Lina’?” On the other side, Grayson’s character and other onlookers are always shocked and gasping at the antics.

The first 45 minutes are fairly tiresome. The fishing village is also ethnically ambiguous, which is confusing especially today. The actors wear brown makeup but are costumed in clothes that are stereotypically French or Italian.

I also feel bad for David Niven who is in a thankless role. He got along well with Lanza, but didn’t like the role he played.

I’m sorry that I find this one so difficult to like. But there are some highlights.

Of course, it goes without saying that Kathryn Grayson and Mario Lanza both sing beautifully. We get to hear them sing several duets, including a few staged opera scenes. Though I have to note that Lanza wears a modern Navy uniform in the Madame Butterfly scene … even though we are set in the 1900s.

As a child, I only knew James Mitchell as Palmer Courtland in “All My Children,” which was my mom’s soap opera of choice. It wasn’t until I was a teenager that I knew Mitchell was a trained dancer, who worked as assistant choreographer to Agnes De Mille on some projects. A major highlight of this film is Mitchell dancing to the “Tina Lina” with Rita Moreno. Unfortunately, this is the only major dancing scene in the film, but still a major highlight.

It’s a shame that THE TOAST OF NEW ORLEANS misses the mark, especially when THAT MIDNIGHT KISS is charming and fun. At least this film showcases two incredible vocal talents, and we have a capsule of Lanza’s beautiful singing voice.