Plot:
After her husband left 20 years ago, Nan Masters (Bainter) has been raising her four daughters on her own ever since: Tinka (Rosemary Lane), Linda (Lola Lane), Cora (Page) and Buff (Priscilla Lane). The sisters are high spirited, adore their mother and have fun with their boyfriends (Lynn, Foran, McHugh). Nan decides to remarry and gets engaged to her Sam Sloane (Crisp), who has been a fixture in the family for 12 years. Shortly after their engagement, Nan’s ex-husband Jim Masters (Rains) turns up in the home; turning the household upside down.

Other trivia:
• In response to the success of “Four Daughters” (1938), “Daughters Courageous” was made in with the same cast. “Daughters Courageous” was not part of the trilogy but had a similar formula and the same cast. Michael Curtiz directed “Daughters Courageous” in 1939. Two more “Four Daughters” films were made: “Four Wives” and “Four Mothers” (1941)
• Based on the play “Fly Away Home,” which opened in New York Jan. 1935.
• Ernest Haller had to replace James Wong Howe as director of photography when Howe became ill, according to Michael Curtiz’s biographer.
• Working titles were American Family, A Family Affair, Family Affair, Fly Away Home and Family Reunion.
• A version of “Fly Away Home” was released in 1942 as “Always in My Heart” with Kay Francis and Walter Houston. 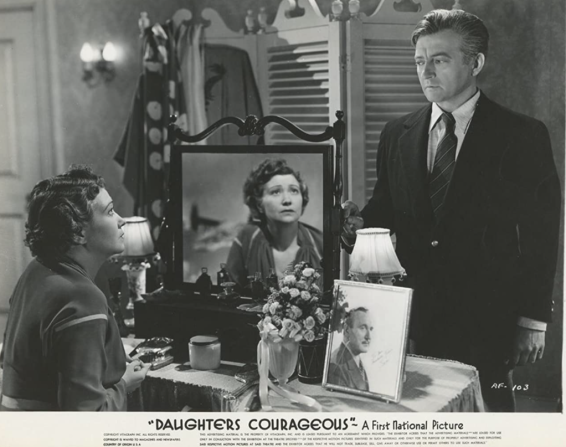 The three Lane Sisters were partnered with Gale Page to play four sisters. Several of them are in love with a man played Jeffrey Lynn. Then a drifter comes into town, played by John Garfield, turns the household upside down.

With the success of this film, Warner Bros. was kick to recast many of the players in new film the following year: “Daughters Courageous” (1939). The same stars were brought over from “Four Daughters,” include Claude Rains, Priscilla Lane, Rosemary Lane, Lola Lane, Gale Page, John Garfield, May Robson, Dick Foran, Frank McHugh and Jeffrey Lynn. The new cast members include Fay Bainter and Donald Crisp.

The director was also the same, Michael Curtiz, and Max Steiner composed the score for both films.

“Daughters Courageous” follows a single mother and her four daughters. Her husband left 20 years prior and as soon as she’s ready to remarry, her ex-husband reappears. His resurgence isn’t welcome by his wife but his daughters are drawn to him.

John Garfield was said to like this film, and director Michael Curtiz called it his obscure masterpiece, according to his biographer.

While “Daughters Courageous” is generally said to not be as good as “Four Daughters,” I still enjoy it and think it’s important in the 1939 cannon. It’s notable because it’s another film that teamed three of the Lane sisters. Also, 1939 was successful for John Garfield, Priscilla Lane and Jeffrey Lynn, because of how Four Daughters (1938) jumpstarted their careers.

I was charmed by this film as soon as we saw the sisters behind the credits and then on the beach. The film has the same homey energy as “Four Daughters,” with the added bonus of excellent actors like Fay Bainter and Donald Crisp. Bainter is one of my favorite actresses and I’m always happy to see her in anything.

I will also say, this film ends differently than most films of this era. I liked the ending because I was expecting it to end differently. Thank goodness it doesn’t.

Overall, I find this a lovely film that while it sometimes is trying to be “Four Daughters,” stands on its own with a different type of charm.