Plot:
Right before graduation, a group of college students are putting on a school musical starring Louise Menard (Rhodes) and Jack Mitchell (Bracken), who believes he has better ideas than Happy (Henry), the play’s director. During rehearsals, two of their classmates are murdered, and the students try to get to the bottom of it.

Trivia:
• The song “I Don’t Want to Walk Without You” was introduced in this film, which was written by Jule Styne and Frank Loesser.
• Remake of “College Scandal” (1935)
• Last film of Ella Neal
• Working titles included “Terror by Night” and “Sing a Song of Homicide.” The title was changed to “Sweater Girl” to capitalize off the sweater girl craze.

Highlights:
• The combination of a music and mystery 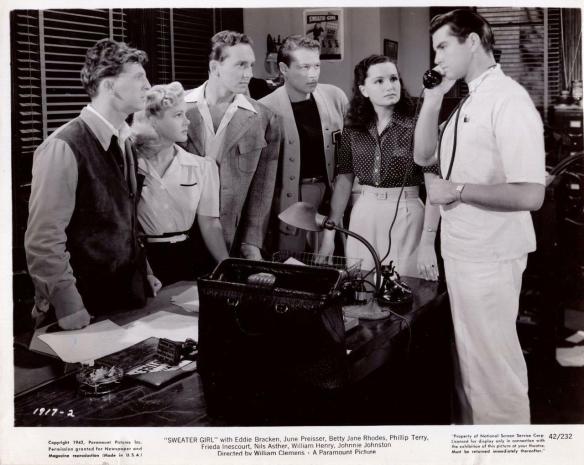 My review:
This film is an unexpected delight!

“Sweater Girl” (1942) mixes a combination of elements which may seem mismatched, but blend well in this film: a college setting, a musical, comedy and murder mystery.

The film follows a group of college students who are putting on a show. But in the midst of rehearsal, some of the students are murdered. In between rehearsals, the students (primarily Eddie Bracken and June Pressier) try to investigate the murders. The show’s star Louise (Betty Jane Rhodes) is also in a secret relationship with a professor (Phillip Terry), so they are keeping it under wraps until graduation.

Betty Jane Rhodes in a publiciy photo for “Sweater Girl”

Musically, this film has some great songs. It’s also important in the world of music history. “Sweater Girl” introduced the song “I Don’t Want to Walk Without You,” written by Frank Loesser and Jule Styne, which became a hit during World War II. The song is first performed in the film by Johnny Johnston and then by Betty Jane Rhodes.

Though not as well known, a critic said of Betty Jane Rhodes:
“Her place in the history of popular song is secured by her having introduced on screen one of the great songs of wartime longing, “I Don’t Want to Walk Without You”

The song became best known for being performed by Harry James and his Orchestra with Helen Forrest singing.

“Sweater Girl” (1942) also provides an excellent mystery. When it’s revealed who the murderer is and why, I was so surprised I gasped. It has a great, unexpected twist!

“Sweater Girl” has the perfect combination of mystery, music and comedy, which is primarily comes from Eddie Bracken and June Pressier.

The only minor drawback is that the title may not necessarily match the film. The working title of “Sing a Song of Homicide” perhaps would have worked better, but “Sweater Girl” refers to the sweater craze of the time (made famous by Lana Turner). The film also opens with a song about sweater girls, which is to be performed in the musical show.

While I encourage everyone to find this film, I’ll share that I had to find it through different means, but if you can find it, I recommend it. It’s a good time.